The pair complete a top-notch driver squad for 2014.

Timo Bernhard and Romain Dumas were the first drivers to be selected. The two bring the experience of seven overall victories each from 24 hour races – Nürburgring, Daytona, Spa and overall victory together in Le Mans with Audi. In July 2013, the ex-Formula 1 test driver Neel Jani joined the team, with Mark Webber onboard since the end of the 2013 Formula 1 season. Brendon Hartley and Marc Lieb now complete the squad. 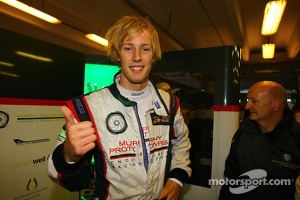 Hartley left his homeland early to advance his racing career in Europe. Following on from successes in the Formula Renault and Formula 3 came the long-awaited Formula 1 contract – as a test driver but with precious little chance to race. Hence, parallel to his F1 commitments, Hartley turned to sports car racing. He said: “I’m incredibly proud that Porsche has chosen me. I was deeply impressed at my first outing in Le Mans. But to compete there in the LMP1 for an iconic company like Porsche is another dimension completely.”

Marc Lieb was 20 years old when his career as a race driver at Porsche took off: In the year 2000, he won the Porsche Junior driver selection. In addition to a raft of class victories, he also scored five overall wins at 24 hour races, four times on the Nürburgring, once at Spa. “I have been fortunate enough to celebrate victories with Porsche all over the world,” said Lieb, “even in the GT class at Le Mans. People there always asked when we would return to the LMP1 class. Since the project was given the go-ahead, I only wanted one thing: to be involved. Le Mans and Porsche, I can’t even begin to describe how excited this makes me feel.”

Mark Webber disclosed: “For me a lot of it is familiar, a lot is foreign, everything is special. I’m absorbing every bit of information I can and I’m already looking forward to the next tests.” The nine-time Grand Prix winner took the wheel of the 919 hybrid for the first time several days ago in Portimão, Portugal.

Timo Bernhard has a few more kilometres to his credit. He said: “I’ve been with Porsche for 15 years and I feel an immense responsibility that comes with the return to LMP1. In the development, all your skills as a driver are required. The first premise is not to drive fast, it’s more to feel what the car is doing and to share even the smallest details with the engineers.”

Romain Dumas, who celebrates his 36th birthday today on the Night of Champions, underlined: “We are a good team for the development of the 919 hybrid. We have a lot of work ahead of us. The 2013 class victory with Marc Lieb and Richard Lietz in the factory-run Porsche 911 RSR was really great, but now we’re heading into new territory, and with all the complex technical innovations, our new squad faces an enormous challenge.”

Neel Jani summarises: “It has always been my goal to one day fight for overall victory in the WEC and Le Mans. To do this you have to be part of a good works squad, and this is where I am right now. To compete for Porsche is a great honour and it comes with a lot of responsibility. We want to write a new chapter in the great history of Porsche motorsport, even if it takes time. The technology is completely new and we need to grow together as a team.”