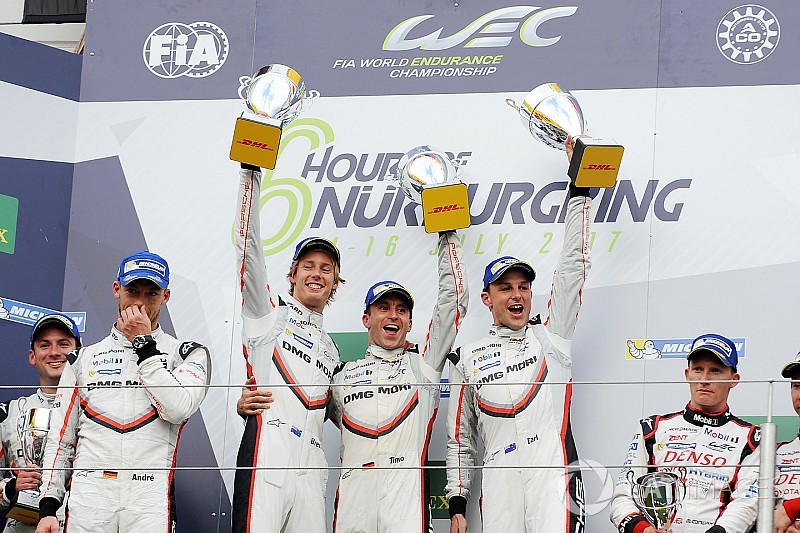 Porsche has explained its decision to impose team orders in the closing stages of the Nurburgring 6 Hours to hand the win to the championship-leading #2 Porsche 919 Hybrid.

At the last pitstop of the World Endurance Championship event, Porsche decided to hold Andre Lotterer's #1 car in its pitbox for an additional 20 seconds.

That allowed the Le Mans-winning sister #2 car of Timo Bernhard, Brendon Hartley and Earl Bamber, which was trailing by 13 seconds, to take over the lead and win the race.

Following back-to-back wins the #2 Porsche now leads the championship by 30 points over the #8 Toyota, which finished a distant fourth after a fuel pump issue on the formation lap.

Neel Jani, who shares the #1 Porsche with Lotterer and Nick Tandy, was disappointed with the outcome of the race.

“At the end I think we had the edge, unfortunately Le Mans haunted us,” Jani told Motorsport.com. “The double points, they cost us everything. I think Andre at the end had the fuel to drive back home…”

The Swiss driver, who hasn’t won a WEC race since last year’s Le Mans 24 Hours, admits the team was briefed about the team orders in advance.

“Yes, we knew our destiny, but we still didn’t believe it until the end,” Jani added. “We still had a 13-second lead.

“I think it was clear we had the edge. The problem is that Le Mans is double points and it comes early in the year. When you don’t finish there, you’re done for the rest of year.

“Let’s hope it doesn’t happen [again] until Bahrain, but I don’t see it ending soon.”

Porsche LMP1 team boss Andreas Seidl said he understands the #1 crew’s frustration, but defended his decision to swap positions. “For sure I can understand it doesn’t make them happy, but in the end they understand,” said Seidl.

“The most important thing is to be transparent on it. That's how it is in racing. One time it is in your favour and another time it isn’t.

“Of course it’s a luxury problem to have two race cars after six hours within ten seconds. It’s simply a confirmation of the great job everyone has done. We have six top drivers who all showed they can win. It’s the result we want for the best positioning in both championships, I couldn’t be more happy tonight.”

The switch is reminiscent of the 2015 Fuji 6 Hours, where Jani also handed a certain win to the championship-leading sister car, then driven by Bernhard, Hartley and Mark Webber.

Seidl pointed out that team orders are nothing new in LMP1, with Toyota and previous competitor Audi also imposing team orders when the championship situation prescribed them.

“It’s the same thing that all three manufacturers had been doing since 2014,” added Seidl, who also refused to rule out more team orders in the remaining five WEC rounds.

“We will always do what is best for Porsche.”