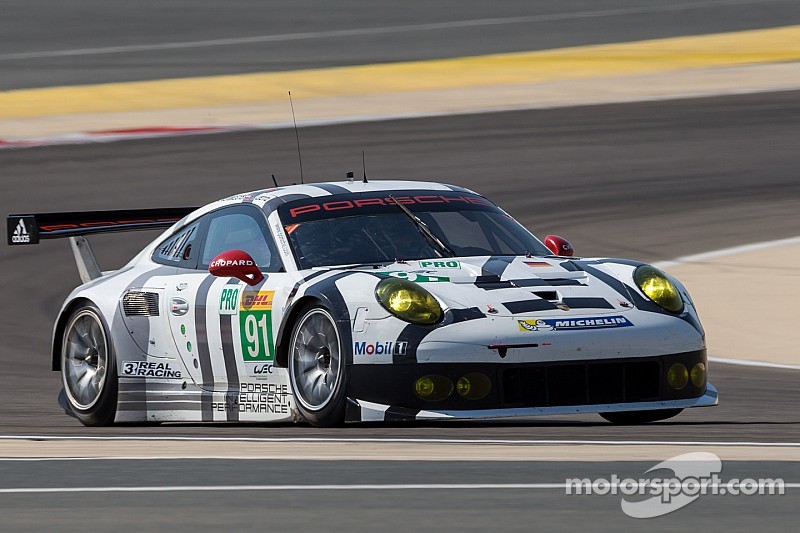 One title is still up for grabs on the legendary Grand Prix circuit in the Brazilian megacity São Paulo.

Stuttgart. The six-hour race at the Autodromo José Carlos Pace on 30 November marks the end of the 2015 Sports Car World Endurance Championship WEC season. One title is still up for grabs on the legendary Grand Prix circuit in the Brazilian megacity São Paulo – victory in the manufacturers’ classification of the GTE-Pro class.

The Porsche Manthey team, which fields two Porsche 911 RSR in this strongly-supported category and raised the stakes in the bid for the championship after a double victory in Shanghai, is now keen to treat fans to a gripping season finale.

The Porsche 911 RSR campaigned in the Sports Car World Endurance Championship is based on the seventh generation of the iconic 911 sports car. At its race debut in 2013, the winning car from Weissach scored an emphatic double victory at the 24 Hours of Le Mans. For 2014, the vehicle received improvements in many areas. The 911 RSR kicked off the season with victories at the long distance classics of Daytona and Sebring in the USA, before going on to win the WEC races at Silverstone and Shanghai.

Dr. Frank-Steffen Walliser, Porsche Head of Motorsport: “First and foremost we want to offer the Brazilian fans a great race and an exciting season finale. Even though there probably won’t be a great showdown in the fight for the championship because our chances of taking the title are pretty much theoretical after Bahrain, we’ll still put all our efforts into preparation. A great deal can happen in a six hour race, especially on such a challenging circuit. We’ll take on the challenge and, should there still be a chance for us, we definitely want to be ready.”

Marco Ujhasi, Project Manager 911 RSR: “The key to success on this circuit is a good setup for the infield in order to carry as much momentum as possible onto the long straight. The car must also be good over the kerbs. We’re working on this because last year we weren’t totally perfect in this respect. This year’s race is almost three months later than in 2013, which means the temperatures will be higher. Plus the track surface is new. So we must see to which extent we can use last year’s data. It’ll be interesting.”

Jörg Bergmeister (Porsche 911 RSR #91): “It will undoubtedly be a great season finale. The circuit is very beautiful and the Brazilian fans create such a fantastic atmosphere. We had a lot of fun there last year. This time we have to adjust to a new track surface, so let’s see how strongly it will affect the setup. It would be great if we could finish the season with a win. We’ll definitely be doing our utmost right to the end to possibly secure the manufacturers’ title for Porsche.”

Richard Lietz (Porsche 911 RSR #91): “Although we all had a great time in São Paulo in the last years, they were very difficult races. And it’ll surely be tough again this time. The weather could play an important role. It would certainly help if it rained. For me this race is the last of a very eventful and very long season. It kicked off with a victory at the 24 Hours of Daytona, and it would be wonderful if we could conclude the year with a win in Sao Paulo.”

Frédéric Makowiecki (Porsche 911 RSR #92): “I love this track. The Senna-S is a fantastic corner. The many spectators lend this event a great atmosphere, they are true racing fans and crazy about motorsport. Sao Paulo marks the end of my first season as a Porsche works driver. It was a super year. Although the switch was not easy at first, I’m completely happy to be driving for Porsche. Porsche perfectly represents the spirit that I was looking for when I became a race driver. The greatest thing for me would be if we could win in Sao Paulo and secure the championship title for Porsche.”

Patrick Pilet (Porsche 911 RSR #92): “São Paulo is a legendary race track on which many great stories have been written, particularly in Formula 1. But it’s not easy – the twisty infield with its changing elevations is especially difficult for GT cars. The new tarmac doesn’t make things easier. On TV recently I watched the Formula 1 race there, they had huge problems with the level of grip. That will be critical for us, as well. An eventful season comes to an end in São Paulo. The entire team can be proud of the work they’ve done this year. We’ve learned something at every race. It would be wonderful if we could be rewarded for this with a victory in São Paulo.”

Loic Duval: An open letter to (the retiring) Tom Kristensen