Qualifying without sparkles for Ferrari at Austin 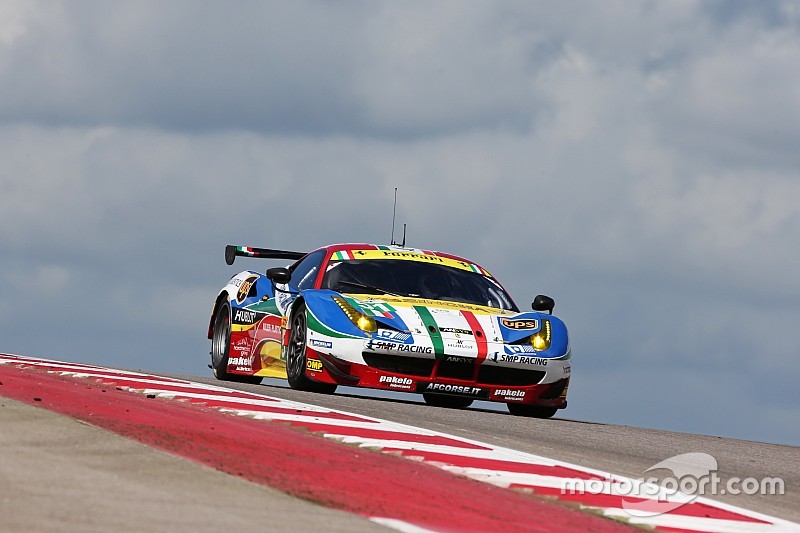 Sixth and seventh place in GTE-Pro class for the 458 Italias of AF Corse No. 51 of Bruni-Vilander and No. 71 of Rigon-Calado

Austin, 18 September – Qualifying without sparkles for the four Ferrari 458 Italias competing in the fifth round of the World Endurance Championship struggling for grip for the entire session. The race pace displayed during the last session of the free practice, anyway, gives reason for optimism for the 6 Hours that is due to start at 5 p.m. (24 CET) tomorrow.

In GTE-Pro class, Toni Vilander and Davide Rigon, at the wheel of cars No. 51 and 71 respectively, opened the qualifying session. The Finn, reigning world champion, recorded a time of 2’07”204 while Rigon stopped the clock at 2’07”114. Both drivers struggled to correctly bring the tyres to temperature and had to contend with low grip.

The pole position for the category went to the Aston Martin No. 99 of Satanaway-MacDowall-Rees with a time of 2’05”872. The Porsche of Jani-Dumas-Lieb earned the overall pole position thanks to a time of 1’46”211. The race is long and the good pace displayed by the Ferraris augurs well. Both the world champion crew and the Calado-Rigon pair will face a come-from-behind race tomorrow, so it won’t be an easy day.

In the GTE-Am class, a Ferrari came within a whisker of the pole position. The Aston Martin No. 96 of Hall-Castellacci-Simonsen, which recorded a time of 2’08”264, will start ahead of everyone, but the 458 Italia No. 83 of AF Corse entrusted to François Perrodo, Emmanuel Collard, and Rui Aguas was just 68 thousandths of a second behind. However, another competitor squeezed between these two cars: the Porsche No. 77 of Dempsey-Proton Racing driven by Dempsey-Long-Seefried.

The standings are extremely tight also in the following positions: the Aston Martin No. 98 of Dalla Lana-Lamy-Lauda placed fourth in 2’08”440 just 2 thousandths of a second ahead of the SMP Racing’s 458 Italia No. 72 of championship leaders Viktor Shaytar, Aleksei Basov and Andrea Bertolini. Therefore, the race which starts at 5 p.m. tomorrow promises to be incredibly tight.