Racing into the night at Sebring can bring magic or heartache

The final two hours at Sebring International Raceway is when the teams take stock of where they are in the hour 10 standings to determine what their chances are of taking the victory or, at least, a podium finish. Over the past days, many of the racers said that “over the first 10 hours, their main goal is to stay out of trouble and bring the car back after their stints” so they can be there in the end. After the 10th hour is when they treat the race like a stint and not an endurance race.

Shortly after the 10th hour and even with the track completely in darkness, the battle for positions heated up, and it did not take long for the first caution to appear when the top two American Le Mans Series (ALMS) GTC teams had a coming together.

Two of Audi R18s were 1-2 for the World Endurance Championship (WEC) LM P1 class. The #2 with Dindo Capello, Tom Kristensen and Allan McNish are the leaders with two hours remaining. Nearly 39 seconds behind is the #3 car of Timo Bernhard, Romain Dumas and Loic Duval.

Third behind the diesel-powered Audis is the petrol HPD ARX-03a from the Muscle Milk Pickett Racing team with drivers Lucas Luhr, Klaus Graf and Simon Pagenaud. They are the top ALMS P1 team, and are one lap away from the top step of the podium. 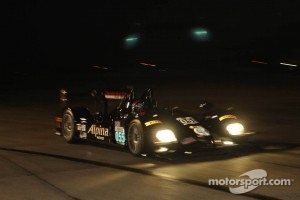 The #055 Level 5 Motorsports HPD ARX-03b holds first but the pressure is on as the top four in the LM P2 classification are on the same lap on the 3.740-mile historic circuit.

In the ALMS only Prototype Challenge Oreca FLM09 cars that show two teams on the same lap and aiming for the victory. The #52 PRI Mathiasen Motorsports holds the lead over the #06 CORE autosport team.

The GT class is a true fight and while the Ferrari teams are not in the final battle, the Corvette Racing and the BMW RLL teams have both cars in the run for the glory in what is now a sprint race.