Rigon to take part in the 6H of Bahrain

Davide Rigon will be behind the wheel of the 8Star Motorsport’s Ferrari 458 GTE.

After the good results achieved at the 6H of Shanghai, Davide Rigon will be behind the wheel of the 8Star Motorsport’s Ferrari 458 GTE, to contest the last round of the FIA World Endurance Championship, to take place this week end at the Sakhir circuit, in Bahrain. 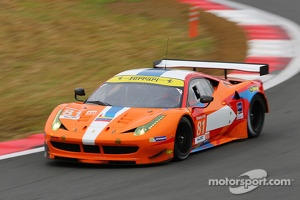 The Vicenza-born driver, who is at the Scuderia Ferrari’s disposal, will take part in the World Endurance Championship for the fourth time, after taking the second place on his debut race at Interlagos, the fourth place at Fuji and sealing a win in China. His aim is to take part in the whole 2014 FIA WEC Championship season Mark Webber will also take part in. In the 6H of Bahrain, Davide will make his talent available to the Scuderia to aim for winning the GTE AM title. Thanks to the success he scored in Shanghai, there is only a 5-point-gap between the team and standing’s peak. Everything will be played throughout the race’s 6 hours “It was great to win in Shanghai. It was my first win in this championship, after taking a win in 2008 in the FIA GT Championship’s 24H of Spa at the wheel of the F430. I feel very comfortable with the car and the team. I’ll do my best even in Sakhir, to help the team win the title, as it happened with Andrea in the GT Open.”

The Vicenza-born driver will return to Bahrain four years after finishing third at the wheel of the GP2 Dallara “I took the third place in the GP2 Championship in 2009. I hope to achieve better results. I would like to take part in the Championship next season. It’s a pleasure to drive a GP2 car” says the Minardi Management’s driver.

Krohn Racing geared up for 6 Hours of Bahrain