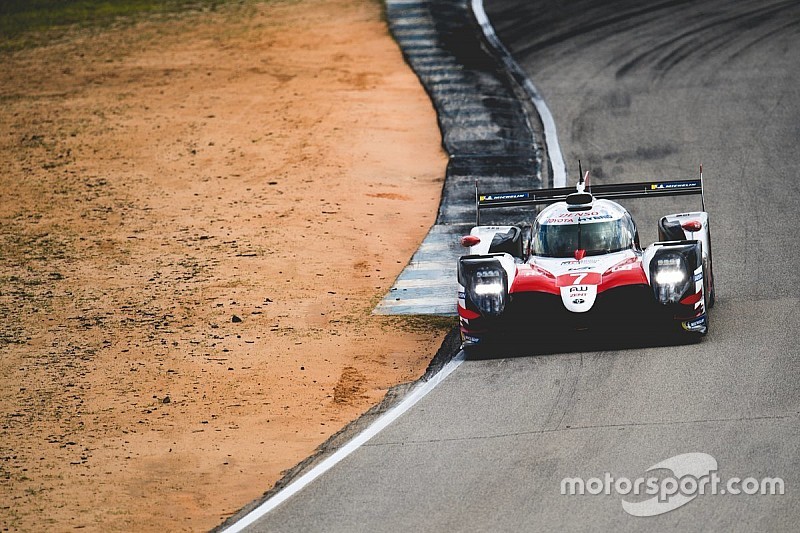 Toyota LMP1 driver Mike Conway bettered his unofficial lap record of the Sebring International Raceway on the second and final day of testing for next week's FIA World Endurance Championship round.

Having smashed Marcel Fassler's 2013 record around the Florida circuit on Saturday, Conway set a marginally quicker best time of 1m41.152s in the afternoon session on Sunday to put the #7 Toyota TS050 Hybrid on top for a second day in a row.

The British driver's time was just 0.052s faster than Fernando Alonso in the sister #8 Toyota.

In the morning session, Kamui Kobayashi again put the #7 car clear of the #8 driven by Alonso, making it a clean sweep of best times for the second-placed Toyota crew in the standings.

Leading the non-hybrid LMP1 charge was new SMP Racing recruit Sergey Sirokin, who posted a 1m42.357s in the #17 BR Engineering BR1-AER in the morning to get within half a second of Kobayashi's best.

Another ex-Formula 1 driver, Brendon Hartley, made it a three-four for the Russian squad with his afternoon best time of 1m42.608s in the #11 BR1.

Gustavo Menezes was the quickest of the Rebellion drivers with a 1m43.296s in the #3 R-13-Gibson, less than a tenth quicker than Bruno Senna in the sister #1 car.

Formula 2 racer Nyck de Vries put the Racing Team Nederland squad on top of the four-car LMP2 field with a best effort of 1m47.086s in the #29 Dallara P217.

That was less than a tenth faster than Nicolas Lapierre's best time in the #36 Signatech Alpine Oreca 07.

Porsche usurped Ford at the top of the GTE Pro times in the afternoon session as Richard Lietz posted a 1m57.302s best lap in the #91 911 RSR.

Andy Priaulx's best time in the morning in the #67 Ford GT was just over a tenth slower, while Davide Rigon made it three different marques in the top three in the #71 Ferrari 488 GTE.

GTE Am has headed by Matteo Cairoli in the #88 Dempsey-Proton Porsche with a best time of 1m58.702s, some half a second quicker than Aston Martin driver Pedro Lamy.

There was drama for the class points-leading Porsche 911 RSR of Project 1 Racing, which suffered a major fire during the morning session while Jorg Bergmeister was at the wheel.

With the chassis believed to be severely damaged, the German squad now faces a race against time to be ready for first practice on Wednesday.