Second and fourth for Ferrari in Spa qualifying 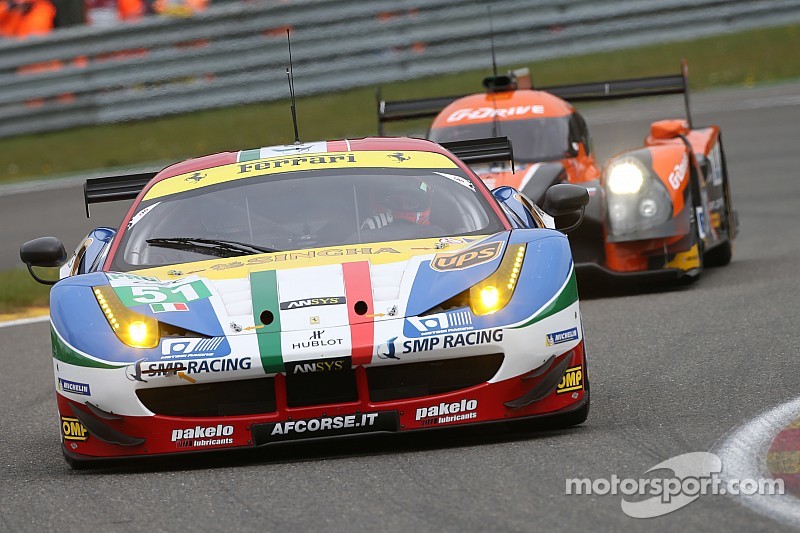 In the GTE Pro class “Gimmi” Bruni and Toni Vilander qualifying second and James Calado and Davide Rigon, will start from fourth position.

The best on the grid in the GTE Pro class was the no. 99 Aston Martin of Reed-MacDowall-Stanaway who got a combined time of 2’16”840.

However, duo of Ferrari 458 Italia world champions, “Gimmi” Bruni and Toni Vilander, were in tight contention, qualifying second behind the Aston Martin. Bruni and Vilander stopped the clock at 2’16”910, just seven hundredths off pole position. Bruni was the first out on the track getting a time of 2’17”5 then handing the no. 51 car to Vilander. The Finn set a good 2’17”401 and then gave back the car to the Italian who in his last attempt, a few seconds from the end of the session, was able to establish an astonishing 2’16”420 (fastest time overall) that led to the final combined time.

The other AF Corse GTE Ferrari team, the no. 71 of James Calado and Davide Rigon, will start from fourth position, qualifying with a combined time of 2’17”526. Rigon was the first on track, setting a 2’17”501 pace while Calado stopped the clock at 2’17”551. The two drivers have continuously shown improvement as teammates, especially with this weekend similar qualifying times. Between the two Ferraris is the no. 97 Aston Martin of Turner-Mucke-Bell who qualified with a combined time of 2’17”231.

There were three more Ferrari on the track, AF Corse’s no. 55 and no. 83 and SMP Racing’s no. 72. The best was car no. 55 driven by Matt Griffin, Duncan Cameron and Alexander Mortimer who will start from fourth position in the GTE-Am class after qualifying with a time of 2’21”893. The no. 83 of Emmanuel Collard, François Perrodo and Rui Aguas stopped just over six hundredths from their teammates getting a time of 2’19”958. SMP Racing’s no. 72 team formed by Alexey Basov, Viktor Shaytar and Andrea Bertolini, set the sixth time with 2’22”909. Fastest in the class was no. 98 Aston Martin of Paul Dalla Lana, Pedro Lamy and Mathias Lauda.

Overall pole position went to no.17 Porsche of Webber-Bernhard-Hartley. The start of the 6 Hours of Spa is at 14.30.