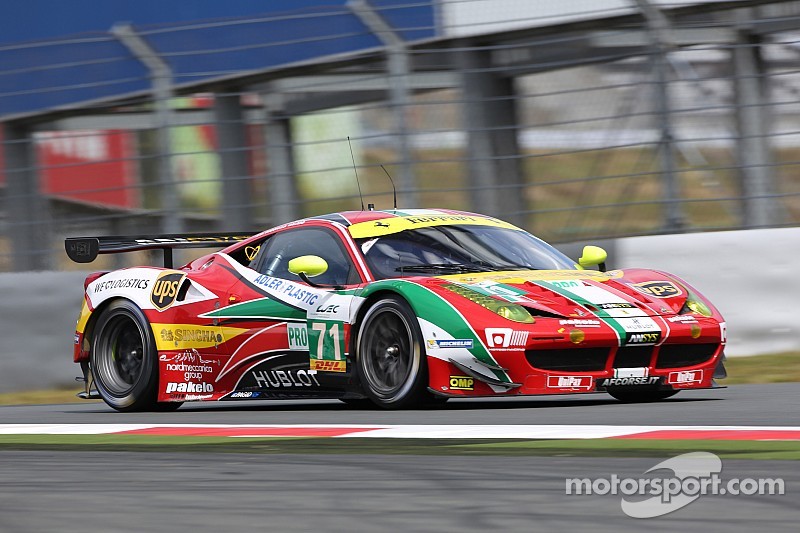 At Fuji circuit, before an audience of over 50,000 spectators, Davide Rigon (together with the team-mate James Calado), won with full rights the podium goal, thanks to a peremptory second place in the FIA WEC World Championship, behind only the twin car #51.

After taking the right confidence with the 4,563 meters of the Japanese track during free practice sessions, Davide and James have placed the Ferrari 458 GTE-Pro #71 in the fourth place of Qualifying and before the Ferrari team-mates and standings’ leaders, Bruni and Vilander, to close the sixth hour of race with the second step of the podium and the best result of the season, giving to AF Corse team and Ferrari both an important and amazing double.

Finally, we’ve seen the potential of Davide in the World Championship. Till today, unfortunately, he wasn’t able to express himself at 100%, for lack of knowledge of tracks and for some technical problems.

Thanks to this proof of strength, the racing team of Maranello lengthens in the Constructors’ standings, bringing its reward to 200 points, before its direct opponents of Aston Martin, stopped at 171 points. "It’s been a hard-fought race right from the beginning; we’ve done a great team job. We’ve been able to express our potential as much as we could, on a track that I already knew, having attended the round of last season, that was cancelled due to bad weather, after a few passes", Davide Rigon says, coming back from Japan.

"After driven half a championship on circuits completely unknown to me, now we come on tracks already known. This may be transformed into an extra advantage, because some secrets are discovered only during the race. Going back to Fuji’s race, with the second place we’ve completed an excellent weekend, both for us of AF Corse and for Ferrari that consolidates the leadership among constructors".

Important leap forward in standings also for the driver from Vicenza: "A podium that gives us awareness of working in the right direction and being entered in the top-10, among the best of championship". A success dedicated to his friend Jules Bianchi, who right in Japan is fighting his most important battle after his terrible accident. "We are all with Jules. We want to dedicate this double 100% to him, hoping he’ll come back soon to drive".

"Finally, we’ve seen the potential of Davide in the World Championship. Till today, unfortunately, he wasn’t able to express himself at 100%, for lack of knowledge of tracks and for some technical problems. On the first occasion, however, he succeeded brilliantly. I am sure we’ll be competitive in all latest races, in order to help Ferrari, as protagonists, to win the Constructors' title", the manager Giovanni Minardi comments.

Next round of FIA WEC is scheduled for the 2nd of November in China, where there’ll be the 6 Hours of Shanghai.