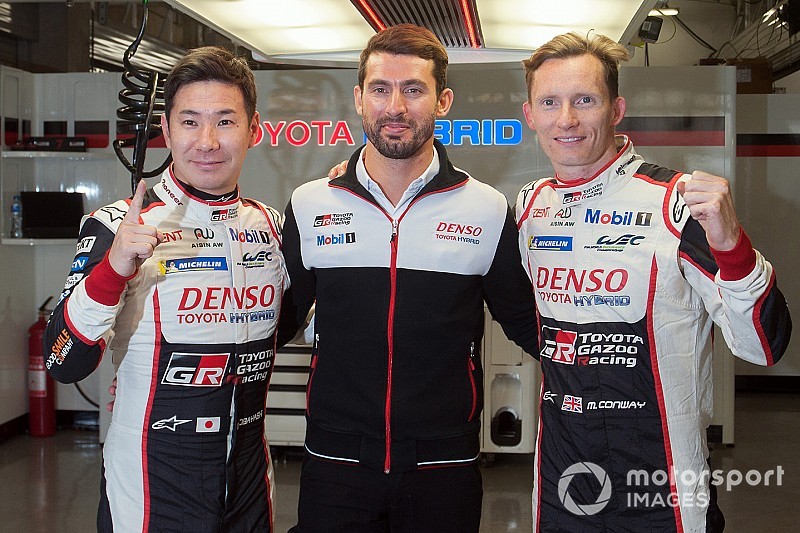 Kamui Kobayashi and Mike Conway took pole position at the end of a session in which Toyota came under pressure in qualifying for the first time of the 2018/19 WEC superseason.

They ended up with a 1m42.931s average in the #7 Toyota TS050 Hybrid, which was only three tenths up on the #1 Rebellion-Gibson R-13 qualified by Bruno Senna and Andre Lotterer.

Both Kobayashi and Alonso then went again, the Japanese driver going four tenths quicker than his teammate on the way to the fastest time of the session, a 1m42.708s.

That meant Kobayashi and Conway finished with a 1m42.931s average, four tenths up on Alonso and Nakajima's 1m43.139s.

Lotterer also went again on a fresh set of rubber and found seven tenths to improve to a 1m42.869s to lower the #1 Rebellion's average to 1m43.218s.

Kobayashi said: "The track was improving and Mike did a great lap, so I went again, which was important because it was quite tight at the end."

The DragonSpeed BR1 driven by Ben Hanley and Renger van der Zande edged out the second of the AER-engined SMP cars qualified by Jenson Button and Vitaly Petrov for sixth.

They ended up on a 1m48.888s average aboard their Jota-run Oreca 07, which put them a quarter of a second up on the sister car qualified by Nabil Jeffri and Jazeman Jaafar.

Nicolas Lapierre set the fastest P2 time of the session in the Signatech Oreca on a 1m48.598s, but Pierre Thiriet ended up more than three seconds slower after a spin.

That dropped them to fourth behind the DragonSpeed Oreca qualified by Pastor Maldonado and Roberto Gonzalez.

Ford claimed a last-gasp pole position in GTE Pro after Stefan Mucke went out for a second run in the car he shares with Olivier Pla.

The German found over a second with a 1m56.464s lap aboard the #66 Ford GT to snatch pole away from the BMW M8 GTE of Nicky Catsburg and Martin Tomczyk.

Maxime Martin and Alex Lynn took third in the best of the  Aston Martin Vantage GTEs with a 1m59.000s, which was just three hundredths faster than the lead Porsche 911 RSR of Michael Christensen and Kevin Estre.

The two AF Corse Ferraris took ninth and 10th places, qualifying only ahead of the Chevrolet Corvette C7.R.