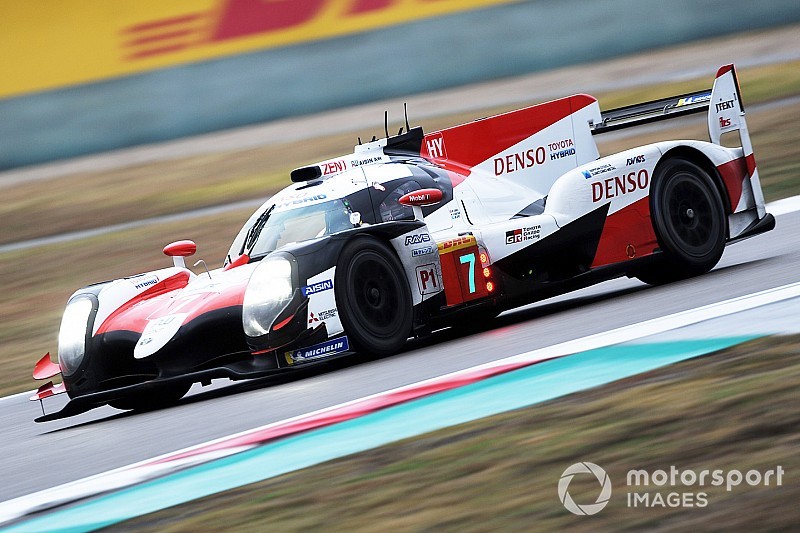 Toyota remained in control of the timesheets in second practice for this weekend's Shanghai FIA World Endurance Championship round.

The pace in the afternoon session was slower than it was in first practice, meaning Sebastien Buemi's 1m54.768s set on intermediate tyres in the #8 Toyota TS050 Hybrid stood as the day's fastest.

In FP2, it was the #7 car that led the way, as Jose Maria Lopez jumped to the top of the timesheets right at the end of the a session in which the LMP1 runners used only wet tyres.

Late improvements by Andre Lotterer in the #1 Rebellion and Jenson Button in the best of the SMP Racing BR Engineering BR1s put them fourth and fifth, ahead of the #17 SMP BR1 of Egor Orudzhev.

LMP2 was once again topped by Jazeman Jaafar in the #37 Jackie Chan DC Racing Oreca, as the Malaysian knocked the Signatech Alpine from top of the times right at the end of the session.

James Calado was quickest in the GTE Pro class in his AF Corse Ferrari 488 GTE, his best time of 2m14.315s coming shortly before an off at Turn 2 that caused a full-course yellow.

That was some way off the 2m09.830s set by BMW driver Martin Tomczyk in FP1 on slick tyres, however.

Antonio Felix da Costa was second in the afternoon the best of the BMW M8 GTEs, followed by Maxime Martin in the top Aston Martin Vantage GTE.

Giancarlo Fisichella put the Spirit of Race Ferrari 488 GTE at the top of the order in GTE Am, five seconds down on the best time recorded in FP1 by the TF Sport Aston Martin.