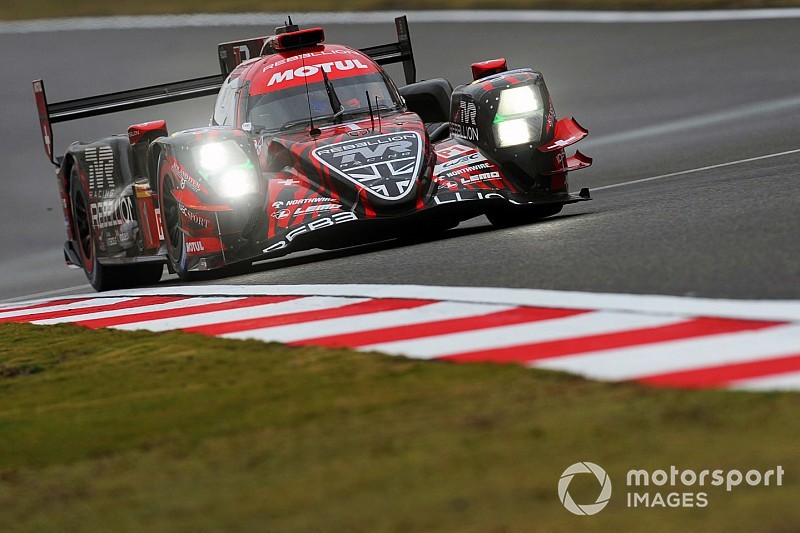 After both of Friday's practice sessions were held in damp conditions, teams were able to get their first dry running of the weekend during Saturday morning's one-hour session.

The best of the Toyota TS050 Hybrids was the #8 car of Kazuki Nakajima, who was a further 0.012s back in third.

Toyota's #7 car endured an eventful session, as Kamui Kobayashi spun at Turn 1 after 13 minutes and later in the session was seen briefly touring on track before returning to speed.

Kobayashi's best lap of 1m45.321s put him fourth, a little under two tenths behind the lead Toyota.

SMP Racing's pair of BR Engineering BR1-AERs were fifth and sixth fastest, with the #17 car of Stephane Sarrazin ahead of the #11 machine driven by Jenson Button.

Ex-Toyota LMP1 racer Anthony Davidson set the pace in LMP2 for the DragonSpeed team with an early effort of 1m50.907s in the #31 Oreca 07.

That was enough to eclipse the Signatech Alpine of Nicolas Lapierre by exactly half a tenth of a second.

Jackie Chan DC Racing's lead entry, the #37 that had topped both Friday sessions, was third in the hands of Nabil Jeffri.

Aston Martin topped the times in GTE Pro courtesy of a 1m59.628s lap by Nicki Thiim in the #95 Vantage GTE.

The only other car in class to dip beneath the two-minute mark was the #66 Ford GT of Olivier Pla, who ended up two tenths off the pace, with the lead Porsche 911 RSR of Michael Christensen completing the top three.

Corvette Racing propped up the class timesheets, the #64 C7.R ending up 2.2s off the pace in the dry.

GTE Am was led by the Clearwater Ferrari squad, Matt Griffin recording the car's best time of 2m01.583s.

Gulf Racing driver Michael Wainwright caused a full-course yellow halfway through the session when he got the #86 Porsche beached in the gravel at Turn 2.