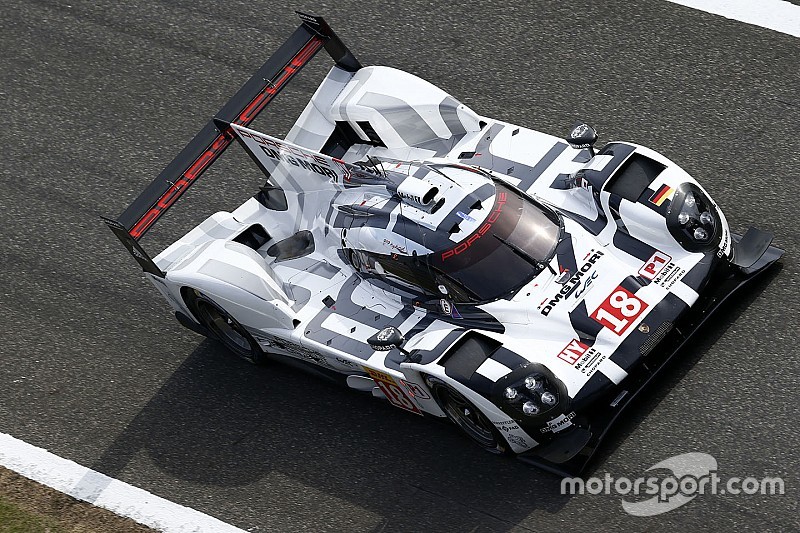 Porsche leads at the halfway stage of the 6 Hours of Shanghai after some exceptional endurance racing action at the penultimate round of the 2015 FIA World Endurance Championship.

The race started under Safety Car and immediately saw drama as Marc Lieb and Andre Lotterer collided at Turn 7 on the first green flag lap.

The #18 Porsche 919 Hybrid of Lieb spun and was stuck on the inside kerb, which dropped him to the back of the field and triggered a superb recovery drive from the German.

Lotterer, in the #7 Audi R18 e-tron quattro, was able to stay reasonably close to Hartley’s leading Porsche in the opening hour, but the Kiwi was then able to extend the small lead until handing over to team mate Timo Bernhard in the third hour.

When Audi elected to make pit stops and driver changes on both its cars, a Full Course Yellow was deployed to retrieve Dominik Kraihamer’s spun #13 Rebellion as Porsche briefly ran 1-2.

However, when another FCY came, this time to recover the Kazuki Nakajima’s #1 Toyota TS 040 HYBRID from the turn 16 gravel-trap, Porsche also took the opportunity to change drivers.

Bernhard emerged from the pits just behind the #7 Audi, now driven by Benoit Treluyer in third place, with the #8 Audi R18 e-tron quattro of Lucas di Grassi in the lead.

With Bernhard’s #17 Porsche 919 Hybrid just ahead of the recovering #18, now in the hands of Nell Jani, a battle royal played in the third hour.

With the track remaining consistently wet, di Grassi appeared to let Treluyer through in to turn one. This allowed the Frenchman to build a small lead as di Grassi held off the marauding Porsches behind him.

Neel Jani proved to be the quickest Porsche at this stage and was soon able to find a way around Bernhard and then also di Grassi to take second place. At stages, the top four were only three seconds apart.

Di Grassi was soon also forced to relinquish third place when Bernhard made a spectacular overtake and the German then went back after Jani to join a two-pronged attack on the leading #7 Audi.

Ten minutes before the end of the third hour, Jani’s #18 Porsche 919 Hybrid found a way by Treluyer and he was able to build a slight lead.

Toyota suffered a tough start to the 6 Hours of Shanghai. The start saw Anthony Davidson get among the leaders but the defending champion soon fell back. A slow puncture then lost the #1 Toyota TS 040 time and then Nakajima’s spin put them further back down the order.

The #2 Toyota, started by Mike Conway, placed fifth and, apart from a spin by Alexander Wurz in the third hour, had a relatively clean run.

In the LMP1 Privateer class the Nicolas Prost and Matthias Beche Rebellion R-One-AER led the ByKolles CLM P1/01 by a lap.

Brundle and Derani star in LMP2

LMP2 saw some typically exciting action throughout the first half of the race with multiple leaders and an excellent cameo performance.

The surprise came from the Pegasus Morgan-Nissan, driven superbly for almost the entire first half by Alex Brundle. Sam Bird’s polesitting G-Drive Racing Ligier-Nissan led for the opening exchanges but after the first pit stops, and with Brundle maximising performance of the wet tyres, it was the Pegasus Morgan that took over at the front.

As the race progressed, Brundle’s Pegasus Morgan and Pipo Derani’s G-Drive Ligier took turns in the lead of the category. A turning point seemed to have arrived as the third hour approached, when the #28 G-Drive was penalised for not respecting the Full Course Yellow procedure. With Brundle pitting at approximately the same time, Ryan Dalziel emerged in the lead in the Extreme Speed Motorsports Ligier-Nissan.

Ho-Pin Tung, who took over from Brundle, sat second while Gustavo Yacaman’s #28 G-Drive placed third. The points-leading #26 G-Drive, which earlier had led convincingly with Sam Bird at the wheel, was running fifth after Julien Canal completed his stint at the wheel. Bird got back in to the cockpit just as the third hour ended.

There was disaster for the KCMG ORECA squad after an early spin for Nick Tandy brought out a Safety Car. The Le Mans-winner rotated at turn ten and was tuck in the gravel, losing two laps. Richard Bradley placed seventh at the halfway stage but the teams’ title hopes appear to be dashed.

LMGTE Pro saw a close contest between Porsche and Ferrari as the class lead ebbed and flowed for the majority of the first three hours.

Toni Vilander led in the first hour for AF Corse but was soon under pressure from the #91 Porsche Team Manthey 911 RSR driven by Richard Lietz.

It then became clear that Porsches had a clear advantage in the wet conditions and, when Michael Christensen completed a superb double stint, the lead had ballooned to over half a minute to the sister car shared by Frederic Makowiecki and Patrick Pilet.

The Ferrari’s were shuffled down to third and fourth with Vilander’s #51 458 Italia heading James Calado's #71 machine.

In the LMGTE Am class, there was a typically ferocious battle throughout the opening exchanges.

Pedro Lamy initially led in the #98 Aston Martin but was overtaken by Paolo Ruberti in the Larbre Corvette.

Ruberti himself was then caught and deposed by a flying Patrick Long in the Dempsey-Proton Porsche 911 RSR.

The American, excelling in the tricky conditions, soon built up a healthy lead right up until the first scheduled pit stop where he handed over to team mate and countryman Patrick Dempsey, who suffered two spins in the treacherous conditions.

The post-stop shake-out benefitted the #96 Aston Martin which had pitted early when Stuart Hall handed over to Francesco Castellacci. The Italian then engaged in an entertaining battle with Emmanuel Collard’s Ferrari.

Soon though it became an all-Aston affair as Mathias Lauda led Francesco Castellacci, the two swapping positions several times as the halfway stage arrived. Ultimately, it was Lauda who led as the race entered its second phase.