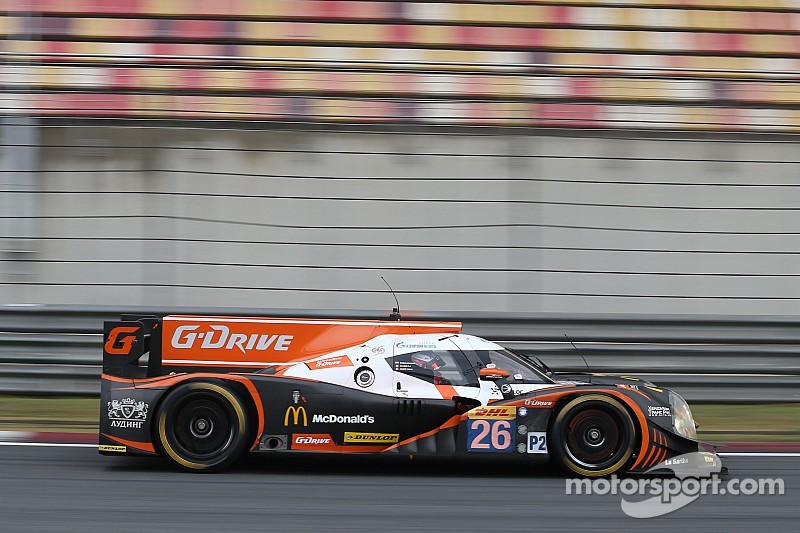 The terrific trio of Roman Rusinov, Olivier Pla and Julien Canal, have given developer Onroak Automotive a second victory in a row for the Ligier JS P2.

G-Drive Racing has come away with another win in LM P2 class at the 6 Hours of Shanghai, the sixth round of the FIA World Endurance Championship. The terrific trio of Roman Rusinov, Olivier Pla and Julien Canal, driving the #26 G-Drive Racing Ligier JS P2 Nissan-Dunlop, have given developer Onroak Automotive a second victory in a row for the Ligier JS P2, the fourth of the season for the team. Following up their win in Fuji, the trio are back in top form, leading from start to finish and delivering a flawless performance.

Despite the heavy fog which lingered over much of the free practice sessions, nothing got in the way of the team scoring their fifth LM P2 pole position of the season, with Olivier Pla setting the fastest lap in the LM P2 class, and was the only one to set a time below 1’54. His two best laps, along with Roman Rusinov’s two fastest times, were more than enough to give them pole.

We have to continue like this, the championship is far from won.

With the sun finally shining in Shanghai, the 6-hour race got underway on Sunday morning. An incident in the opening lap took out the #47 KCMG Oreca-Nissan LM P2, one of G-Drive Racing’s main rivals, and brought out the safety car for about 20 minutes. Once that was sorted, the race got underway.

Olivier Pla was first to drive the #26 Ligier JS P2-Nissan. He had a very consistent double stint, holding onto the lead position and widening the gap over the rest of the field. By the end of his stint in the car, he had almost a minute’s lead over his closest rivals in LM P2. He also set the fastest lap of the race for the LM P2 category with a time of 1’55.900.

After almost two hours of racing, Olivier Pla handed over to Julien Canal. Canal continued the work that Olivier Pla had begun and worked on increasing the lead over the LM P2 field. His stint was consistent without any incidents, a good show from the silver driver. When it was time to hand over to Roman Rusinov, he was leading by more than a lap ahead of the #27 SMP.

Roman Rusinov was third in the car and, like his teammates before him, carried on driving at the head of the pack, working on the gap and enjoying the reliability and consistency of the Ligier JS P2-Nissan. He maintained the lead throughout his stint, and by the time he handed over to Olivier Pla for the final push, the #26 G-Drive Racing car was leading by two laps!

Olivier Pla took the wheel for the final stint and brought the Ligier JS P2-Nissan in its G-Drive Racing colours home to take the top step on the podium once more, winning more valuable points for G-Drive Racing in the team championship standings, reducing the gap to current leaders SMP to 8 points with two races left to contest.

The other Onroak Automotive car, the #35 OAK Racing Morgan-Judd LM P2, struggled a bit this weekend, with brake balance issues disturbing the second half of the race. David Cheng and Ho-Pin Tung, driving alongside fast gentlemen driver Mark Patterson in front of their home crowd, sadly could not repeat the Fuji 6 Hours success of the car #35, nor their own victory here in Shanghai a few weeks ago in the Asian Le Mans Series. All the experience and the work brought by the team and the drivers were sadly not enough to find the way to the podium.

Roman Rusinov: " It was a difficult race. We saw in Japan that even with a 50 second lead, it doesn’t guarantee a win, so here we were pushing like mad for the whole stint. We took a lot of risks. The hardest was to manage the tyres. I think that we took good care of them, at the same time, the car was very competitive. It’s very good for G-Drive Racing, our fourth victory, our fifth pole this year. We were fastest in free practice, took pole and won the race! "

Olivier Pla: " A perfect race from start to finish, since the beginning of the weekend even. I think that we couldn’t have done better. The car was very good and consistent over the whole of my stint. Our advantage was that our tyres degrade slower than the others. We have to continue like this, the championship is far from won. We have to stay humble and work hard and we’ll take another look at the last race. "

Julien Canal: " A perfect race! It’s a very complicated and very physically demanding circuit. It was a bit hard for me, physically, with the large curves, and very technical corners. I think it’s been the most technical one of the year. The car was consistent from the start to the end of my two stints. I think that everyone has done a good job, we didn’t make a single mistake. It’s our fourth victory of the year, and I think we deserved it. I hope that we’re going to continue on this path! "

Philippe Dumas, Team Principal: " I’m not going to tell you again that the team has worked well, that the drivers drove well, and that the car was magnificent. But it’s the truth! The car is perfect, the team is perfect, the drivers are perfect! On to the next episode! Even with the pole position we’re only gaining 8 points on our nearest rivals. We’re gaining points for the championship little by little and we’ll have to fight until the end. "