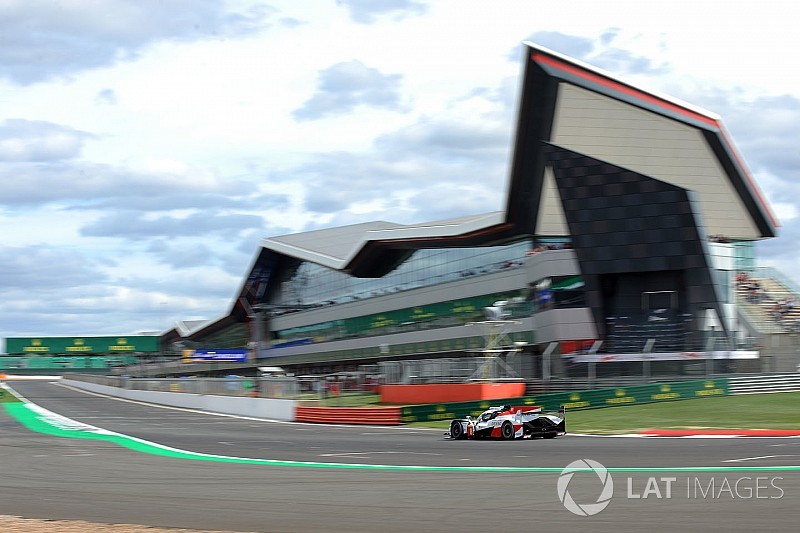 Fernando Alonso set the quickest time in third practice for the FIA World Endurance Championship round at Silverstone, while the two SMP Racing entries split the Toyota hybrids.

Alonso enjoyed an almost-traffic free lap at the start of the hour-long session to record a best time of 1m37.677s in the #8 Toyota TS050 Hybrid, almost a second up on Jose Maria Lopez's Friday benchmark.

Rebellion Racing could only manage fifth and sixth with its pair of Gibson-powered R-13s, with Mathias Beche's best time in the #3 car in the early stages 3.8s off the pace.

Andre Lotterer was a further seven tenths back in the #1 machine that sat out Friday's second session in the wake of Bruno Senna's ankle-breaking crash.

Rounding out the LMP1 order were the #10 DragonSpeed BR1-Gibson and the #4 ByKolles ENSO CLM P1/01, which also had to miss second practice after suffering an oil leak in FP1.

Debris on track at Becketts meant the session was red-flagged with three minutes left on the clock and was not resumed.

Matthieu Vaxiviere kept the #28 TDS Racing Oreca at the head of the times in LMP2 with a best effort of 1m44.247s.

Jackie Chan DC Racing's pair of Orecas were next up, Nabil Jeffri in the #37 leading Stephane Richelmi in the #38, followed by Pastor Maldonado in the #31 DragonSpeed Oreca.

Ford locked out the top two positions in GTE Pro, with Harry Tincknell's 1m55.197s effort in the #67 car edging out Stefan Mucke in the #66 GT by six tenths.

Aston Martin continued its improved form with the third-best time, 1.2s off the pace with Nicki Thiim at the wheel of the #95 Vantage GTE, followed by the best of the Ferrari 488 GTEs in fourth and the lead Porsche 911 RSR in fifth.

The best of the BMW M8 GTEs enjoyed a brief spell at the head of the times midway through the session before dropping back to seventh.

GTE Am was led by Aston Martin courtesy of an early 1m58.460s lap by ex-F1 driver Pedro Lamy.