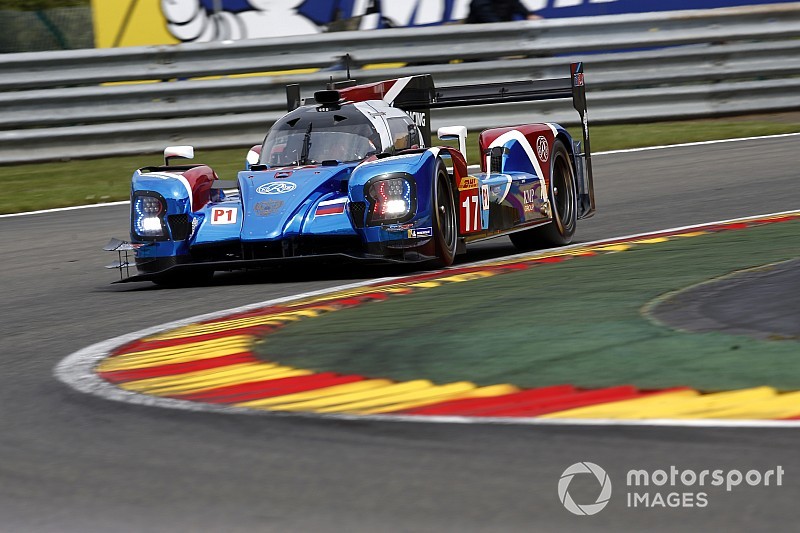 Sirotkin, who made his WEC debut for SMP in the Sebring 1000 Miles, set a laptime of 1m56.264s in the #17 BR Engineering BR1-AER with just under 30 minutes of the 90-minute session remaining.

That followed Vandoorne's lap of 1m58.236s in the sister #11 car, which had the Belgian head of the times and half a second up on the two Toyota TS050 Hybrids.

SMP's surge pushed the Toyotas down to third and fourth places, with early pacesetter Sebastien Buemi's 1m58.742s putting the #8 car 2.478s off the pace.

Mike Conway was a further four tenths down in the #7 machine and only two tenths up on the quickest of the Rebellion R-13s, the #3 of Gustavo Menezes.

Bruno Senna followed in sixth place in the second of the Rebellions, 4.171s down on Sirotkin.

Seventh overall was the best of the LMP2s, the newly-Michelin-shod Signatech Alpine Oreca entry of Andre Negrao.

The Brazilian driver's 2m03.441s put the #36 car ahead of early pacesetter Jean-Eric Vergne in the Aurus-badged G-Drive Racing Oreca, as well as the remaining LMP1, the ByKolles ENSO CLM P1/01.

GTE Pro was headed by Aston Martin, courtesy of a 2m15.290s laptime from local driver Maxime Martin at the wheel of the #97 Vantage GTE.

Harry Tincknell's last-ditch effort in the quicker of the Ford GTs was identical, but the #67 was classified second, ahead of Antonio Felix da Costa in the #82 BMW M8 GTE.

Ford and Aston Martin's respective second cars were fourth and fifth, ahead of the #81 BMW, while Porsche's pair of 911 RSRs filled out seventh and eighth ahead of the two Ferrari 488 GTEs.

An early lap from Ben Barker put Gulf Racing at the head of the GTE Am times in the Gulf Racing Porsche, less than a tenth ahead of Giancarlo Fisichella in the Spirit of Race Ferrari.

The TF Sport Aston Martin was black-flagged for "constant track limits abuse" while Euan Hankey, returning to the team for the first time since last year's Le Mans 24 Hours, was at the wheel.