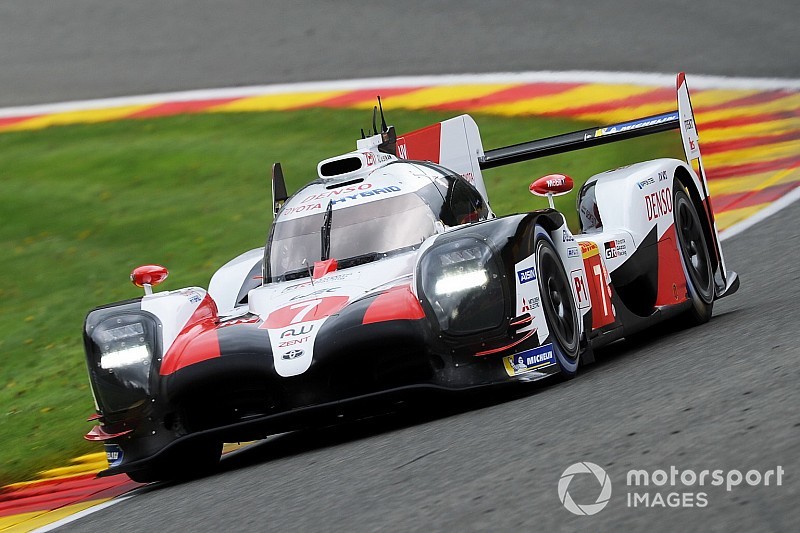 Toyota's #7 crew secured pole position for this weekend's Spa FIA World Endurance Championship round, beating the points-leading #8 car by almost half a second.

Sharing the #7 Toyota TS050 Hybrid, Kamui Kobayashi and Mike Conway both outpaced their opposite numbers in the #8 machine, Kazuki Nakajima and Sebastien Buemi.

Kobayashi posted a 1m53.812s to end up half a second quicker than Nakajima in the #8 car, before Conway went slightly faster with a 1m53.683s to end up a similar margin ahead of Buemi.

That gave the #7 Toyota a 1m53.747s average, which compared with the #8 entry's 1m54.243s. A late rain shower and red flag - caused by the ByKolles stopping along the start/finish straight - denied the #8 crew a chance to improve its time in the closing minutes.

Conway said: "I got a good lap, and it's always rewarding when you do that.

"It's good to get the point for fastest lap, but we know the race tomorrow is going to be hard with the poor weather that has been forecast, so it will be all about making the right calls."

The SMP Racing BR Engineering BR1 qualified by Sergey Sirotkin and Egor Orudzhev ended up best of the rest on a 1m54.711s average, just under one second off pole.

They were nine tenths up on the best of the Rebellion R-13s in fourth place, Gustavo Menezes and Thomas Laurent ending up on 1m55.640s.

The second of the AER-engined BR1s was a further four tenths back in the hands of team newcomer Stoffel Vandoorne and Vitaly Petrov.

Bruno Senna and Andre Lotterer were less than one hundredth of a second behind in sixth position aboard the second of the Rebellions.

Van Uitert had been fourth after the first runs, before Vergne posted the fastest P2 time of the 25-minute session for the prototypes for a 2m00.674s average and the pole.

Gabriel Aubry and Stephane Richelmi were just over half a second in arrears in the best of the Jackie Chan DC Racing Orecas on 2m01.225s.

That was three tenths up on the sister Jota Sport-run car in which Will Stevens had been fastest after the first runs.

Andy Priaulx and Harry Tincknell snatched GTE Pro pole for Ford right at the end of their session.

The #67 Ganassi Ford GT had been fourth after the first runs with a 2m13.571s from Priaulx, but Tincknell briefly moved the car up to second with a 2m12.973s.

Priaulx was then given a new set of tyres to try to improve on his time before the end of the 25 minutes and found seven tenths with a 2m12.797s.

That gave them a 2m12.285s average, which put them less than a tenth of a second up on the Aston Martin Vantage GTE of Maxime Martin and Alex Lynn.

Martin, who had been third after the first runs, had been given another shot after Lynn went three tenths quicker than his Belgian teammate.

Martin then went quicker still with 2m12.698s, which briefly put them on pole prior to Priaulx's improvement.

The BMW M8 GTE of Augusto Farfus and Antonio Felix da Costa, who posted the single quickest laps in class, took third and was the fastest of the GTE Pro qualifiers not to go for an additional run.

They ended up with a 2m12.977s average, just a couple of hundredths behind the Aston.

The second BMW ended up fourth in the hands of Nicky Catsburg, who was fastest after the first runs, and Martin Tomczyk.

Porsche, which leads the manufacturers' and drivers' standings, ended up seventh and eighth with its pair of mid-engined 911 RSRs, while two AF Corse Ferrari 488 GTEs brought up the rear of the 10-car field.