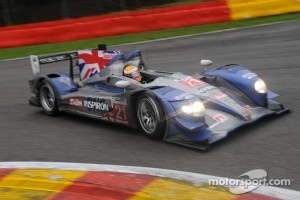 Strakka Racing recorded another strong points-scoring finish in the FIA World Endurance Championship (WEC), when Jonny Kane, Danny Watts and Nick Leventis powered the team’s Honda Performance Development ARX-03a to a magnificent 7th overall at the 6 Hours of Spa-Francorchamps. In addition, the Silverstone-based team finished 3rd in the Privateers’ category, maintaining its challenge for the world title. 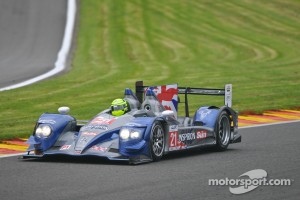 The 3.4-litre normally aspirated V8 engined P1 prototype ran faultlessly throughout the event, which was testament to the talented Strakka technicians who’d repaired the car after an accident in free practice. The HPD ARX-03a was also fast and consistent, despite running with a high-aero wet weather set-up – which was of benefit during the first hour of the race, but a disadvantage once the track dried and the forecast of more rain didn’t materialise.

All three drivers drove flawlessly, with Jonny starting the race and getting the team up to 5th overall and 1st Privateer at one stage, before doing a second stint at three-quarter distance. Danny enjoyed a great battle with Sébastien Bourdais (overtaking him at half distance to take 6th), while Nick completed the run in darkening conditions and reducing track temperature to top off a great team performance by taking the chequered flag.

Having finished 10th at the opening round of the WEC, the 12 Hours of Sebring, a trouble-free run to 7th at Spa cements a strong foundation for the team as it prepares for it’s next race, the Le Mans 24 Hours.

Nick Leventis: “To come away with WEC points on what was clearly going to be a very tricky weekend was a great team effort and everyone in the team should be very proud of what we’ve achieved. Jonny and Danny did a fantastic job and I think we might have been able to finish second Privateers, but the track temperature had dropped and it was pretty dark towards the end of the race, so it was more important to bring the car home safely and take the points. Two good points-scoring finishes in the build up to Le Mans is the best preparation we could have had.”

Jonny Kane: “The start was tricky; really wet, a lot of spray and it was difficult to see where you were until it all began to settle down after a couple of laps. The car felt good in the wet and I overtook a Rebellion and was able to run behind the Audis quite comfortably. We were putting in some good lap times, despite looking after the wet tyres from very early on. We changed to intermediates at the right time, but it was definitely time for slicks when I handed over to Danny. We were very competitive with all the other petrol cars and finished third Privateer, so it was a pretty good day’s work really.”

Danny Watts: “After the setback we suffered in free practice, it was great to bounce back and have a strong race. We had a good car underneath us, the pace was good and consistent, the tyres worked well and we’ve scored more points in the World Endurance Championship. I had no issues at all during my stint; no mistakes, no damage – I just kept going around and around as fast as I could!”

Piers Phillips, Team Principal/Technical Director: “It’s been another great performance by the entire team, who bounced back from our accident in free practice to build a fast and reliable car. Third in the Privateers’ category is another good points-scoring result and a great foundation on which to head into the 24 Hours of Le Mans with.”