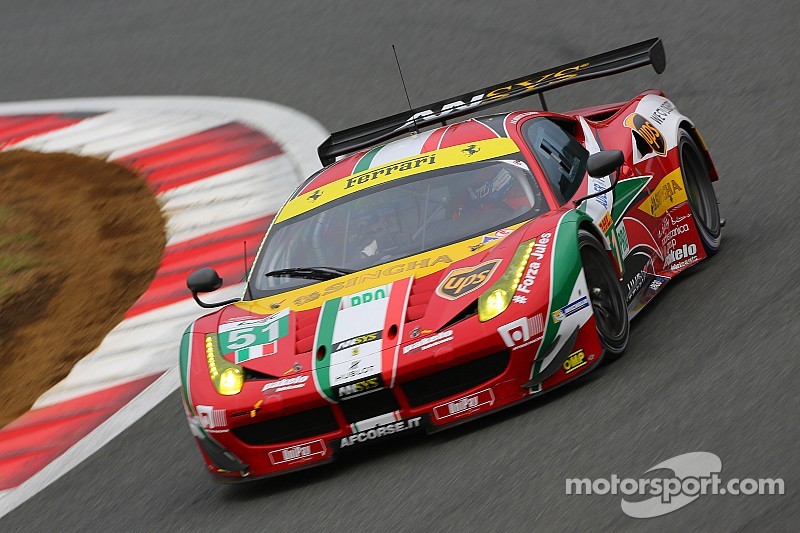 To defend the currently leadership is the target for Ferrari, AF Corse, Gianmaria Bruni and Toni Vilander.

SHANGHAI – On the eve of the “Shanghai 6 Hours” - sixth round of the FIA World Endurance Championship (Wec), scheduled on Sunday, November 2 - Ferrari is leading the GTE Constructors’ championship with 200 points (Porsche in second place at 171); AF Corse is first among the GTE Pro Team with 131 points (Aston Martin Racing is second with 95); Gianmaria Bruni and Toni Vilander, in the AF Corse Ferrari 458 Italia #51, are leading the GTE Pro Drivers’ championship with 131 points (50 ahead Makowiecki).

Remaining in the GTE Pro category, the Ferrari 458 Italy #71 - driven by Davide Rigon and James Calado - want to confirm the positive performances culminated in the second place at Fuji (fifth round of the WEC).

In the GTE Am category, the 8 Star Motorsport Ferrari 458 Italia #90 (managed by AF Corse) have a trio with the real talent to aim for high step of the podium: Gianluca Roda, Paolo Ruberti and Matteo Cressoni. Cressoni make his debut in the Wec with an AF Corse Ferrari 458 Italia.

The AF Corse Ferrari 458’s Italia number 61 and 81 (both in GTE Am category) are out of the usual line up.
In the #61, after the trio in the first part of the season composed of Luis Perez Companc, Marco Cioci and Mirko Venturi – with the great podium in the Le Mans 24 Hours – and the debut in Fuji for Curtis-Bleekemolen-Skeen, in the Chinese round will not race any squad.

The problem of the visa in China complicates the “last minute deal”. Considering the car number 81, this weekend Steve Wyatt will race in another championship, in Malaysia, where he fight for the title. He will come back in the FIA Wec for the last two rounds of the season with his teammates Michele Rugolo and Andrea Bertolini.

Toyota on top in Shanghai rain