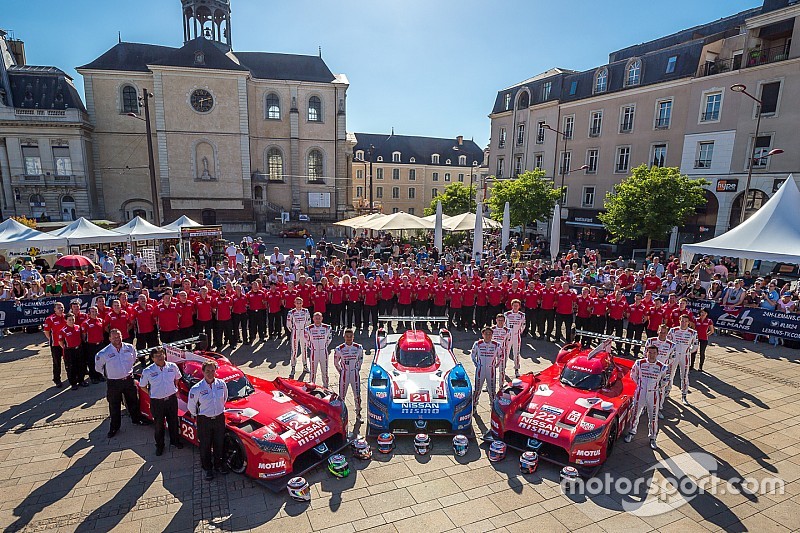 Welcome to Motorsport.com's Top 20 Stories of 2015. Kicking off our list at #20 is the story of Nissan's innovative but troubled GT-R LM NISMO LMP1 machine.

Two commercials aired during Super Bowl XLIX, showing off the radical Nissan GT-R LM NISMO, including the one featured above.

Team principal and technical director Ben Bowlby said this when discussing the unique look of the WEC challenger: “The regulations have allowed us the freedom to create a significantly different looking car. Nissan are bold challengers who are prepared to innovate in order to get a high performance outcome so we’ve turned the whole concept of the conventional LMP1 car of 2014 on its head."

That they did. The car was nothing short of bizarre, and essentially the reverse of what their rivals were doing. Among the several innovative features on the prototype, nothing stands out more than the front-engine, front-wheel drive design that baffled us all.

Under the hood is a 3.0 L direct-injected twin-turbocharged V6.

It was a very different and ambitious way of doing things that ultimately proved unsuccessful when put to the test with a variety of issues plaguing the program. Nissan opted to skip the first two rounds of the season, making Le Mans the team's on-track debut.

Issues with the ERS meant that they were forced to run Le Mans on engine power alone, compromising other systems within the car. All three entries battled various issues throughout the 24-hour test, and when the checkered flag flew, only the No. 22 (driven by Harry Tincknell, Alex Buncombe, Michael Krumm) remained, ending the historic race as the last car running and completing a total of 242 laps.

Despite the poor result, Nissan's ability to even get a car to the finish was a victory in itself. “I am feeling very proud of the whole team right now,” said Nissan’s Darren Cox. “For sure we have had problems but that’s what happens when you innovate. Our engine is strong and we were able to quickly fix the other problems that we had. We have learnt an incredible amount at Le Mans and our battles will only make us stronger.

"Most LMP1 manufacturers don’t finish Le Mans at their first attempt so it was important for us to hit this target. The guys in the garage are the heroes this weekend and the drivers have all done an incredible job, sometimes in very difficult circumstances."

After skipping first the Nurburgring WEC race and then the remainder of the season, the GT-R LM NISMO has still yet to race since Le Mans, while Cox, the architect of the project, has since parted ways with the company after a full decade.

Nissan has been working hard to overcome the technical gremlins and has made several changes in team management positions with plans to give it another go in 2016, bringing an upgraded and (hopefully) more reliable WEC challenger.

The last word goes to NISMO President Shoichi Miyatani: "We are committed to competing at the highest level, and we are not happy when we are not winning."

Mere days after the posting of this article, Nissan announced that they have withdrawn from the 2016 WEC season: STORY HERE