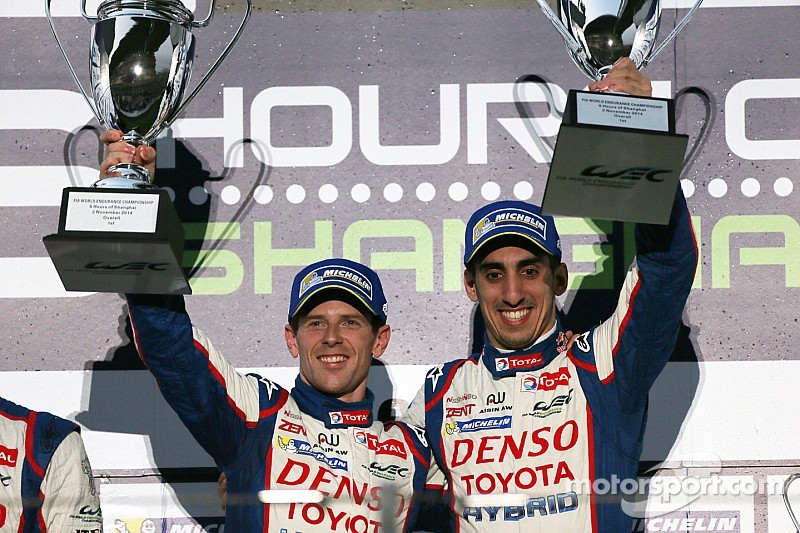 An early strategy call helped Toyota to secure the top two spots in the sixth round of the 2014 season.

After 188 laps of competition, the Six Hours of Shanghai came to a close with Toyota once again on point. The TS 040s came home 1-2 for the third time this season today as the No. 8 machine took its fourth victory of the year. They were followed by the No. 14 Porsche in third.

Porsche got the advantage at the start, but the race was quickly slowed due to an opening lap incident. For the first tim in this event's history, a Safety Car was needed when the second-place starting No. 47 KCMG entry abruptly slowed, causing a collision with the AF Corse No. 51 Ferrari. Both drivers walked away uninjured.

Toyota pitted both their cars during the 22-minute caution period; a risky call that eventually paid off for the duo. The race went off without any other major issues once resuming with 24 of the 27 starters completing at least 75% of the laps.

Taking the LMP2 honors was the No. 26 G-Drive Racing car, collecting win number four of 2014. The No. 30 Extreme Speed and No. 27 SMP Racing drivers joined them on the podium.

The Team Manthey Porsche's earned a 1-2 result in GTE-Pro with the No. 92 taking the victory. The No. 71 AF Corse Ferrari followed in third, a lap adrift of the leaders.

Aston Martin enjoyed the same kind of result in GTE-Am, as the No. 98 led its sister No. 95 across the stripe. The 8Star Ferrari came home in P3.

Six Hours of Shanghai kicks off with LMP2/GTE accident