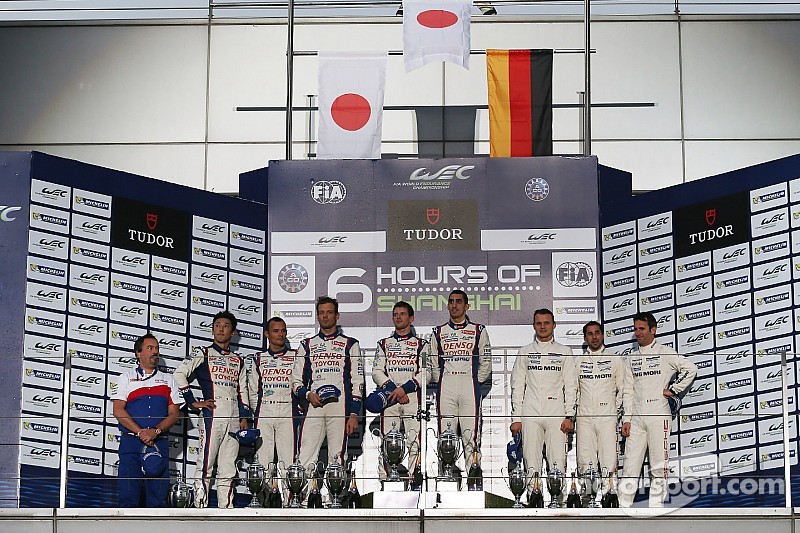 Toyota Racing took its second consecutive one-two victory, winning the Six Hours of Shanghai by more than a lap to extend its lead in the FIA World Endurance Championship.

Anthony Davidson and Sébastien Buemi took a dominant win in the #8 TS040 HYBRID, their fourth of the season, to stretch their lead in the drivers’ World Championship to 42 points.

The 1,000PS four-wheel-drive TS040 HYBRID, which dominated the last round in Fuji, was once again in a class of its own with Alex Wurz, Stéphane Sarrazin and Kazuki Nakajima taking second place in the #7.

That gives TOYOTA a 29-point advantage in the manufacturers’ World Championship with two races remaining.

We showed we had the fastest car in Fuji and we’ve done that again here in Shanghai.

The race started in bright sunshine, with Sébastien and Alex retaining second and fourth positions respectively during the first corners before an accident at the rear of the field brought out the safety car.

While the pack circulated slowly behind the safety car, both cars pitted for new tyres and more fuel, therefore eliminating the need for a short refuelling stop late in the race when more time would be lost.

When racing resumed after 25 minutes, Alex was the leading TS040 HYBRID as Sébastien had pitted a second time to top up on fuel due to a temporary refuelling issue at his first stop.

Sébastien overtook Alex while both soon moved into the top six and began closing on the leaders.

Setting fastest laps on the way, Sébastien battled past the front runners and into the lead by the time he handed over to Anthony, who resumed ahead. Alex was close behind and made two decisive overtaking moves to move from fourth to second.

The two-hour mark passed with the TS040 HYBRIDs stretching their advantage and soon after, at the next round of stops, Stéphane took over the #7 from Alex while Anthony continued for another stint.

A smooth race continued and, as the 100-lap milestone approached, Sébastien returned to the wheel of the #8, by now holding a healthy advantage over the #7.

While Sébastien continued for a second stint in the #8, Stéphane handed the #7 to Kazuki with more smooth pit stops helping to maintain Toyota Racing’s control of the race.

By the time Sébastien swapped with Anthony for the final time, the #8 held a one-lap lead over all cars except the second-place #7. That left Anthony and Kazuki to bring the cars home for the team’s third one-two finish of the season.

The battle for the World Championship now moves into the final stages with just two races remaining, in Bahrain on 15 November and Sao Paulo on 30 November.

Yoshiaki Kinoshita, Team President: “This is the result we have all worked hard for, so thank you to everyone in the team; the pit crew, drivers and engineers who did a great job, particularly on tyre management. The car was quick straight out of the box here in Shanghai. We were disappointed to miss the pole position by such a tiny margin but the big job was the race today. It’s exactly the result we wanted for the World Championship and puts us in a strong position for the remaining races. Now we want to keep this momentum in Bahrain and Sao Paulo.”

Alex Wurz: “That was a mega result for us. It doesn’t get better than a one-two for the team. After the opening laps I wasn’t sure we could manage that because we had a sensor issue on our car. We couldn’t use maximum power early in the race as one of the sensors wasn’t working properly. So we weren’t able to give the #8 guys a run for their money today. But still everyone did a good job to bring the #7 home in second place so I’m very happy.”

Stéphane Sarrazin: “It was a very good race for the team. A one-two is just amazing, as it was in Fuji. We scored big points for the Manufacturers’ World Championship today which was the big target. I didn’t take any crazy risks during my stint; I was careful in traffic and tried to keep a steady pace. The car worked well and I am happy with how the race went. The World Championship was the main focus for us and we achieved our target as a team.”

Kazuki Nakajima: “Congratulations to the team who did a great job today. A one-two finish means we get the maximum possible points today which is great for us in both World Championships. I’m really pleased. I couldn’t relax in my stint because the Porsche was quite close and it wasn’t certain we would finish second. So I pushed hard and I’m happy I could build a gap which made it a bit more comfortable towards the end of the race.”

Anthony Davidson: “Today the whole team did a great job with the right strategy and solid pit stops; everyone kept calm and focused on getting the result. We showed we had the fastest car in Fuji and we’ve done that again here in Shanghai. We didn’t want to take too many risks, particularly in traffic so it was a relatively quiet race for me; Seb did all the spectacular work at the start. To get such a result at this stage of the season is huge for us and now we aim to continue like this in the final two races.”

Sébastien Buemi: “I’m really happy because this is a good step towards the championship. It makes the win even sweeter when it’s a one-two; it’s the best result we could imagine today. The team performed really well, as did Anthony. All in all it was a very good race and the car worked well from beginning to end. It’s our second one-two this season, after Fuji and Silverstone, so now I can’t wait for Bahrain. Hopefully we can keep going like this.”

Audi scores 22 points in battle for WEC title in China