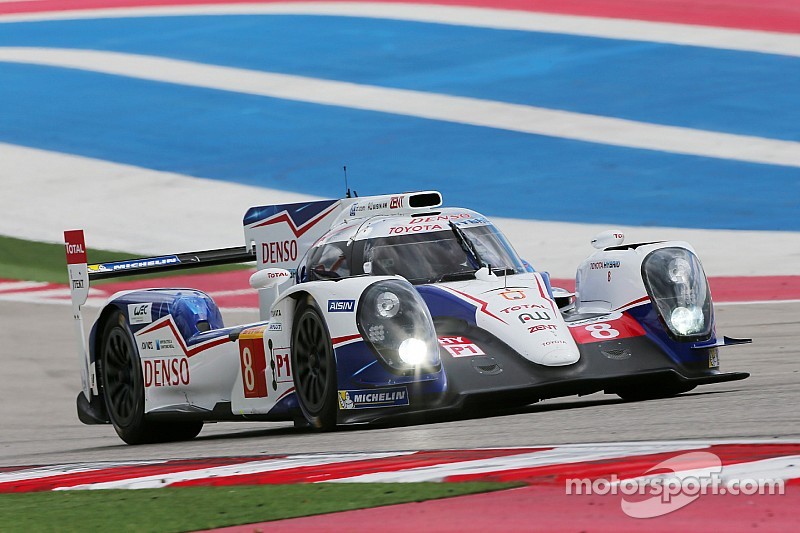 Toyota has displaced Audi at the top as rain showers in the COTA.

The lightning and thunder of a severe storm overhead the Circuit of The Americas delayed the start of the session for an hour, but with a night race looming on Saturday it is mandatory that all drivers have to complete three timed laps in the dark.  The session therefore started under very wet track conditions.

The No. 8 Toyota TS040 of Anthony Davidson snatched the top spot at the chequered flag with a lap of 2m01.333, 1.568s ahead of the No. 1 Audi R18 of Tom Kristensen. The two Audi’s were split by the No. 7 Toyota, with the No. 20 Porsche 919 of Mark Webber, Timo Bernard and Brendon Hartley in 5th, six seconds behind the fastest Toyota.

Porsche’s two 911 RSR ended the session at the head of the timesheets in the LMGTE Pro category, Fred Makowiecki in the No. 92 having set a best lap of 2:17.588.  Until the final minutes of the session it had been a 1-2 for Porsche Team Manthey, Nick Tandy in the No. 91 behind his team mate.  However, AF Corse’s Gianmaria Bruni in the No.51 Ferrari 458 Italia broke up the pairing with a lap of 2:18.195.  The only red flag of the session came just 15 minutes after the start in order to clear a stranded No.71 Ferrari from the side of the track due to a rear suspension problem.

In LMGTE Am, Aston Martin Racing once again led the way.  Richie Stanaway was the man to beat in the No.95 Vantage V8 with a flying, wet lap of 2:24.111 ahead of Christoffer Nygaard in the No.98 entry.  Prospeed Competition’s Matthieu Vaxivière, making his return to the FIA WEC for the first time after a back injury sustained in single-seater racing in May, set the third quickest time in the class.

The third free practice session will be held tomorrow morning at 10:20 (local) and qualifying for the 6 Hours of Circuit of the Americas will get underway at 18:00.

Porsche: Exciting start to the race weekend in Austin