Toyota to only run one car for remainder of season

The first sign that Toyota would run only one of their P1 cars to close out their second season in the World Endurance Championship was in social media.

Toyota Racing has yet to officially announce the decision that they will run only one of their two prototypes in the remaining World Endurance Championship 2013 season but it does appear that the Japanese team has elected to campaign for the top step of the podium with the No. 7 TS030 Hybrid.

The reason stated of going down to just one P1 car is mainly due to preparation for the 2014 season. Still it seems odd that they will not have both cars at their home race in Japan later in the season.

The team is based in Cologne, Germany, and while they had success in their debut season last year, the powerhouse Audi team has been stronger, even with minor problems of their own this year. 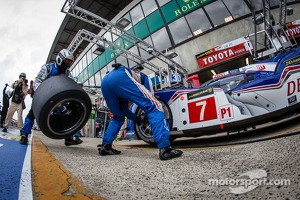 The new regulations from both the ACO (Le Mans) and the WEC for the future is the reasoning behind the team’s apparent decision.

Definite plans have not yet been made on which of their two cars will contest the five races left on the schedule. The next race on the WEC schedule is not until September 1st in Brazil for the Six hours of Sao Paulo.

Word has it that the choice of which P1 will be the No. 7 driven by Kazuki Nakajima, Nicolas Lapierre and Alexander Wurz. That will leave Sebastien Buemi, Anthony Davidson and Stephane Sarrazin on the sidelines; however at any given time, they could change which driver(s) will be racing the TS030 Hybrid per event.

More on this story as it becomes available.