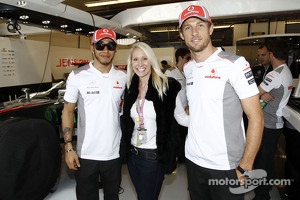 Tracy W. Krohn and his wife, Laurie, spent the November 17-18 weekend taking in all the activities of the Formula One race at the Circuit of the Americas in Austin, Texas, as Formula One racing returned to the United States for the first time since 2007.

“Laurie and I were invited to the F1 race in Austin and had a great weekend seeing our first Formula One race and meeting many of our racing friends,” said Houston, Texas-based Tracy Krohn. “The new track has an exciting configuration and I understand the drivers were very pleased with the circuit layout. The organizers staged a first-class event and it was apparent by the large crowds. It was exciting to be part of the inaugural event at the Circuit of the Americas and I look forward to racing on it myself next year. It’s exciting to have a world-class racing venue right here in my home state of Texas.”

Tracy and Laurie were guests of track sponsor UBS and enjoyed a great view of the race from the Paddock Club suites above the start-finish line. They were also invited to tour the McLaren garage, where they met McLaren drivers, Jenson Button, and Austin race winner, Lewis Hamilton.

Krohn Racing will make an announcement in the near future about racing plans for 2013.

The day Hamilton triumphed for the first time in F1