Ryan Dalziel is enjoying the best season of his career, but he insists it will only be complete when he has led Starworks Motorsport to the FIA World Endurance Championship LMP2 title. 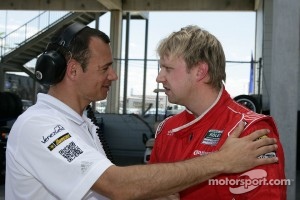 Scottish star Ryan – who lives in Windermere, Florida – can make that dream come true this weekend with victory in the Six Hours Of Japan at the Fuji Speedway.

He will team up once more with Venezuelan Enzo Potolicchio and French ace Stephane Sarrazin and the talented trio are determined to tie up the title with one round still to go.

Ryan comes into the race still on a high after securing his highest ever championship finish with second place in the Rolex Grand-Am Sports Car Series.

Now Ryan, who originally comes from Lanarkshire, wants a dynamic double by steering the #44 Starworks Honda HPD to win a world title.

“My trophy cabinet has been well stuffed after a few lonely years so it has been amazing. I have been really motivated all year and it has gone from strength to strength and the final piece of the jigsaw will be clinching that world title.

“I think the early indication is that we will be pretty strong here, but we saw in Bahrain that we still have problems like everyone else. What should have been an easy victory turned into a lucky third place because of a starter motor failure.

“We will take nothing for granted. We have to maximize our points here

“Our first priority is to keep an eye on what our rivals are doing and match their efforts, but if we can tie it up here then great.

“I was sad to miss the last round at Bahrain, but I was very happy to make sure of second place in the Grand-Am – my highest finish in Grand-Am and I wanted to protect that. So there were mixed feelings because the WEC has been an excellent series for us.

“Although I would have been delighted for Starworks, I am glad they didn’t wrap up the title in Bahrain because I want to be part of that party and to be part of this amazing venue at Fuji.

“We have had an amazing season and we want to win the last two races and lift that championship.

“The key to it has been our reliability. We haven’t always been the fastest car, but other than Bahrain we have been flawless.

“We actually got to test on the track – our first test since Sebring. It was good for Enzo and myself to get up to speed without the pressure of a race weekend. It is a good track and we learned a lot. I feel that every time I get in the car I get better and feel more at home in there. We want to continue the program next year but it would be really good if we were coming back to defend our crown.”

THE FACTS: Ryan will next be in action in the FIA World Endurance Championship at Fuji in Japan on October 14.

Ryan and Starworks Motorsport started the FIA World Endurance Championship with an LMP2 class win and third place overall at Sebring in Florida and a class win in Brazil as well as winning their class at the Le Mans 24 Hours, where Tom Kimber-Smith was in the car with Ryan and Enzo. They also came second at Silverstone with Sarrazin replacing Kimber-Smith.

Ryan also grabbed an LMPC class win and third place overall in the CORE autosport car at Long Beach in California as well as a third place in class at Mosport in Canada.

He had four Rolex Grand-Am podiums in 2011 – a win at Mid-Ohio and third at Barber, Lime Rock and Watkins Glen. He also had three fourth-place finishes. Ryan also gave Starworks Motorsport its first DP victory, at Mazda Raceway Laguna Seca, in 2008.

REBELLION Racing aims for trophy in 6 Hours of Fuji