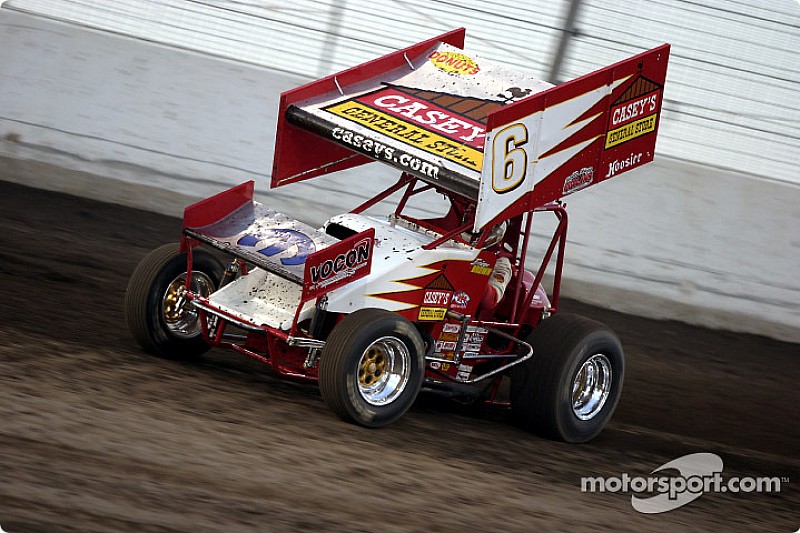 Polesitter hoped for a stronger finish.

Joey Saldana, the polesitter for tonight’s World of Outlaws event at The Dirt Track at Charlotte, strapped in the Motter Equipment HE&M Saw Beltline Body Shop 71M for the final night of racing this season, hoping for a successful evening to finish the year strong.

To start tonight’s racing action, Saldana lined up fourth in the first heat. When the green flag flew, polesitter Tim Shaffer assumed the lead and Saldana was riding fifth. At the conclusion of the eight-lap event, it was Shaffer with a wire-to-wire victory. Saldana finished fifth, just outside the top four transfer spots.

Saldana’s path to the A Main now depended on his ability to work his way through the Last Chance Showdown. For the fifth time this season the Brownsburg Bullet had to fight for one of the four transfer positions for the A Main.

Saldana started on the pole of the B Main and was surrounded by a hungry pack of A-list drivers ready to fight for those transfer positions. When the Brownsburg Bullet bought the 16-car field down to the green flag, Bill Balog and Kody Swanson got together, bringing out the caution. The two drivers were done for the night and the remaining drivers regrouped for a restart. Once again Saldana paced the field and took command when the green flag waved, riding the cushion, the fastest way around the 4/10-mile oval. The second-generation driver led all 12 laps of the LCS and earned the 11th starting position for the final feature of the season.

After one final tribute to Steve Kinser who was retiring from full-time World of Outlaws competition tonight, 26 starters assembled side by side for the start of the 30-lap A Main. As the green waved, Brian Brown surged to the lead, followed by Daryn Pittman.

Saldana began to make gains, negotiating traffic to move up to seventh place. With eight laps complete, Donny Schatz and Kerry Madsen made contact while racing for fourth place, bringing out the caution. Schatz made slight contact with the wall and went to the work area but was able to rejoin the back of the field. This is when the other drivers in the event should have cued the famous soundtrack from ‘Jaws.’ Just like the shark in the movie, Schatz began to eat up the competition. Brown continued to lead the field, while Saldana battled Rico Abreu, Craig Dollansky and Paul McMahan for fifth position.

Racing slowed again with 13 laps complete. Brown and Pittman started one-two and Saldana was sixth. On the green, Pittman began to challenge Brown in earnest with multiple slide attempts. Pittman could pull even with Brown, but couldn’t pass him. With two-thirds of the race in the books, Schatz passed Saldana to take sixth.

On lap 27 Pittman charged by Brown to take the lead right before the final caution with three laps remaining.

On the restart, Brown got the advantage and regained the lead. Stevie Smith moved to second. Brown won the event and a check for $12,000. Smith finished second, Pittman was third. Schatz made it all the way up to fourth.

The Motter team will attend the awards banquet tomorrow and then head back to Minnesota where next season’s cars are already being prepped.