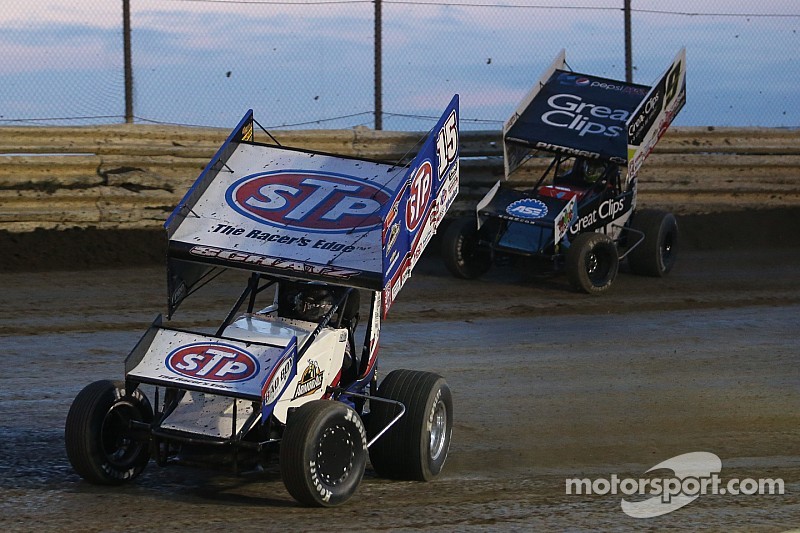 Stockton, Calif. -  Shane Stewart had victory in sight as he rounded turn four on the final lap of Saturday night's FVP Western Spring Shootout at the Stockton Dirt Track. Reigning World of Outlaws Sprint Car Series champion Donny Schatz had other things in mind though as he dove to the bottom of the track and drag raced Stewart to the finish line.

By just .220 seconds, Schatz overtook Stewart and became the first repeat winner of the 2015 season - a streak that goes back eight races - and ended his own winless streak in the State of California that stretched all the way back to September 2012.

"I'm just happy for my whole Bad Boy Buggies team," Schatz said. "These guys have had a little bit of everything this year. We've had good, bad, indifferent and to be able to be the first repeat winner, hopefully we get on a roll here."

Schatz entered the feature on the second row. He took the quick time in qualifying earlier in the night and set a new track record with a lap of 12.566.

I didn't know if we had any leeway or not, I was just trying to hit my marks the best I could.

Paul McMahan and Stewart led the field to the green flag in the 30 lap feature. Stewart quickly jumped to the lead on the start as McMahan fell back. Schatz overtook McMahan for the third spot on lap two. After battling for several laps, he cleared Saldana for second on lap seven. Saldana retook the spot just before a caution was called on lap eight, which gave the position back to Schatz.

As the field returned to green, Stewart built up a sizable lead over Schatz and Saldana.

A rash of cautions through the early and middle portion of the feature bunched up the field on laps eight, 12, 13 and 19. Each time, Stewart hung tough, holding off challenges from Schatz and building his lead back up.

"Those restarts are kind of what killed us," Schatz said. "You get everybody bunched back up and they get a run at you."

Schatz nearly lost his second place position to Saldana following the restart on lap 13, but after a side-by-side back straight battle, Schatz maintained.

The battle for the lead took shape after the lap 13 restart. Stewart got a good start, but Schatz quickly closed the gap and fought past Stewart as the two drivers exited turn two. Schatz led lap 16.

Meanwhile, in third, Saldana worked hard on each restart to hold off McMahan who tried to find a way around the No. 71m Motter Equipment car. Saldana held the position each time and stayed focused on the leaders.

The battle between Schatz and Stewart intensified after the restart on lap 19. The drivers made contact on lap 20 as Stewart looked low in three and four and Schatz fought to hold him off. Schatz held onto the lead. In the waning laps, as the two drivers worked their way through lapped traffic, Stewart worked to get around Schatz. He soon found his opportunity.

"We got by (Stewart) in traffic," Schatz said. "I didn't know if we had any leeway or not, I was just trying to hit my marks the best I could. I don't know, I kind of got worse as the race went on. I just kept trying to change my style and couldn't quite get my car to do what I needed it to."

With two laps remaining the caution flag flew for the final time as D.J. Netto found himself stopped off track in turn one. When the field returned to green, Stewart got his opportunity as he battled past Schatz on the backstretch to lead lap 29.

As Stewart led the field to the finish, he looked low as Schatz went high.

"Shane dove into three across the bottom and I knew if I didn't go Hail Mary on the top, there was no prayer for me," Schatz said.

The two banged bumpers and then drag raced down the front stretch. As they crossed the finish line, Schatz had nosed ahead by just .220 seconds.

"I wasn't sure where I needed to be coming off of four and obviously when Donny got by me, he was better than I was off of four but I felt like I was better than he was in one and two," Stewart said. "Just the last couple of laps, I told him I didn't even see the white flag. I didn't see the checkered - a hell of a race."

"It was close," Stewart continued. "We try to keep (Schatz) honest - he's the best and tonight proved that. Just hoping we can stay where we are. We've got a heck of a car and if the driver doesn't mess up very many times, I think we can win some more races."

Stewart ended the night with a 16 point lead over Schatz in the championship standings. It was the fourth night in a row Stewart finished second.

Saldana, who finished the night in third after battling McMahan for position much of the night, almost found disaster after getting forced off the track late in the race.

"I don't think Shane saw me there and I almost didn't finish - I got lucky there that I got run off the track and got back on," Saldana said. "It's fun racing up front and when you get close you want more but it's so hard to get more out here. You've just got to kind of take what you can get and move on. So hopefully tomorrow we can get a little bit better."