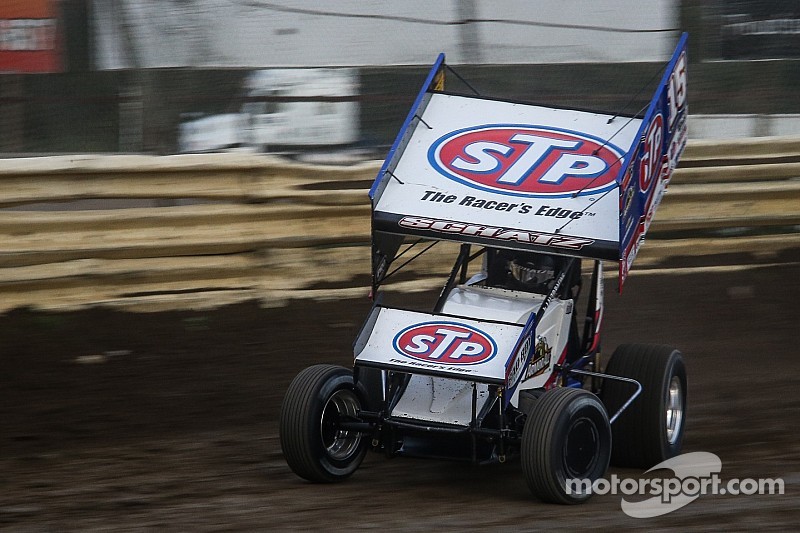 Donny Schatz bounced back from six races off the podium to score his 21st World of Outlaws STP Sprint Car Series win of the season at Kokomo Speedway on Tuesday night.

The five-time champion and current points leader started fourth in the feature and after fighting his way forward on the start, battled past then leader David Gravel and managed to hold off a series of challengers through eight cautions and restarts.

He also had a little luck on his side, avoiding Brad Sweet who spun right in front of Schatz as the checkered flag flew.

"I tried to keep going there," said Schatz of seeing the spin. "I didn't know if he was going to come across. It happened. I'm glad it happened coming to the checkered."

Schatz, who just two weeks earlier had an incredible six race win streak and 18 straight podium finishes, struggled as the series made its way down the West Coast and then returned to the Midwest. He credited his STP / Armor All team for going back to work to improve.

"The STP guys did a great job tonight," Schatz said. "They finally got back to the shop, slept in their own beds for a few nights and really showed us tonight that they got this thing tuned up. Our car is really rotating well."

"Well, this is about as close to home for the guys in the shop as it's going to get," Schatz said. "It's great. We've got everyone from the shop here. This is like a hometown win for this race team. It's always great to have that."

"Everything was great tonight. I'm just happy to be standing here."

Schatz extended his lead for the World of Outlaws STP Sprint Car Series championship to 222 over second place Daryn Pittman. Paul McMahan remains in third, 313 points out of the lead.

Gravel kept the lead for just three laps before Schatz got around.

Cautions continued to plague the feature for the first half coming out a total of eight times throughout the night. Jac Haudenschild brought out a red flag after he got hung up on the wall in turn two. An open red was called, allowing teams to make minor adjustments to their cars.

As the feature wore on, Dale Blaney, who started in third, moved up and down within the top-five as Brad Sweet went on a charge, moving into the top-three on lap 17. As he battled Gravel for second, Sweet jumped the cushion and spun his car in turn three bringing out another caution and relegating him to the back of the field.

With seven to go, Schatz caught the back of the field and began to make moves around lapped traffic, including his teammate, 20-time champion Steve Kinser.

"I got by Kraig (Kinser) and I was working on Steve and Kraig went back by both of us," Schatz said. "Kraig got good on the bottom - I was trying to get by both of them at the same time. I didn't know if someone was coming."

Someone was coming - Dale Blaney.

"I had one shot at it and I kind of dove to the bottom and didn't get a very good run off," Blaney said.

With Stewart close behind, the move for the lead ultimately cost Blaney the second spot. Stewart, who was charging hard as the laps wound down closed the gap on Schatz but ultimately ran out of time.

"Yeah, the race clicked off really quick," Stewart said. "I was really surprised to see the white flag."

"They've been working really, really hard for me and it's greatly appreciated," Stewart said. "I just had a good car. Steve made a few adjustments on that open red and I think it helped me. It's one thing to catch Donny, but it's another thing to pass him."

Blaney, who came home third on Tuesday night, said he found a good groove on the bottom that helped him get the run on Schatz and then ultimately hold on to a podium finish.

"To come here and run an Outlaw race, and come here and run third and be competitive makes us feel good," said Blaney who has one Outlaws win this season at Attica. "We'll come back Friday night at Eldora and hopefully get after them again."

The World of Outlaws STP Sprint Car Series returns to action on Wednesday as it takes on the Terre Haute (Ind.) Action Track. After that, the series moves east for the 4-Crown Nationals at Eldora Speedway on Sept. 19 and the Commonwealth Clash at Lernerville Speedway on Sept. 20.

Madsen wins at Antioch in closest Outlaws finish ever