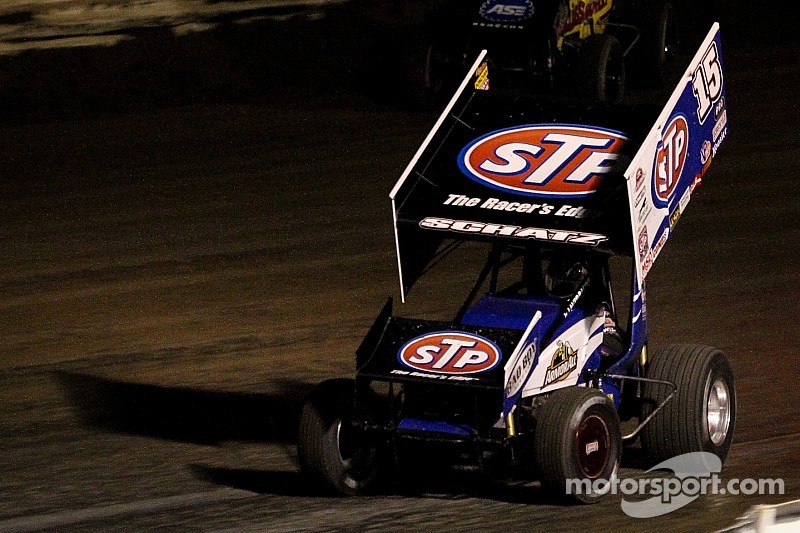 We knew after coming up 14 points short of a championship last year that we weren’t going to be outworked this year.

Schatz, driver of the No. 15 STP/Armor All/Crimsafe J&J machine for TSR, was dominant from the time he took over the top spot in the championship standings following his victory May 31 at I-96 Speedway in Lake Odessa, Michigan. The Fargo, North Dakota, native and his STP crew, consisting of Rick Warner, Steve Swenson and Eric Prutzman, crushed the competition with a series-best 26 wins, 62 top-five and 79 top-10 finishes in 86 races. Schatz and Co. can add to those stats this weekend with the series’ final two races at Charlotte.

“Winning this championship is the result of hard work by so many people,” said Schatz, whose five previous WoO titles came in 2006, 2007, 2008, 2009 and 2012. “The entire Tony Stewart Racing organization and all of our partners should be proud of what we accomplished. We knew after coming up 14 points short of a championship last year that we weren’t going to be outworked this year. From all the guys on the team, our teammates both in the Outlaws and USAC Series to our marketing partners – STP, Armor All, Crimsafe, Chevrolet – our motor builder, Ron Shaver, and J&J Auto Racing, who builds our cars, there are so many pieces to this puzzle.

Donny is a true champion and an incredible ambassador not only for TSR, but for the entire sport of sprint car racing. He’s never lost sight of the ultimate goal – winning the championship

“We came out looking for wins and consistency and set some pretty lofty goals. First was winning the championship and second was topping the 23-win mark of last season. Remarkably, we were able to accomplish both of those and win another Knoxville Nationals. It was a total organizational effort that enabled us to reach these new heights. Now, we can celebrate as one.”

Schatz rides a string of 35 consecutive top-10s heading into Charlotte. He’s finished first in four of the previous six races and second in the other two, and he returns to Charlotte as the leading feature winner at The Dirt Track with seven wins in 35 starts.

Schatz won the season finale event of the 2008 World Finals, his first season with TSR, and swept the World Finals in 2011. Last season, he qualified second for both programs before winning Friday night’s main event and placing third in the finale. Schatz finished second earlier this season at Charlotte.

Schatz began his quest for a sixth WoO title by winning two of the first five A-Features, including a run from 11th to first at Volusia Speedway Park in Barberville, Florida in the season’s second night of action.

He made history in April by winning his 150th career WoO A-Feature at Devil’s Bowl Speedway in Mesquite, Texas, site of the first-ever WoO race in March 1978.

A pair of late-June victories, first at River Cities Speedway in his home state of North Dakota and then at 34 Raceway in Burlington, Iowa, moved him past Mark Kinser for third on the all-time WoO win list.

There were some rough spots along the way, but everyone kept working to get better.

His fifth Don Martin Memorial Silver Cup win in mid-July at Lernerville Speedway in Sarver, Pennsylvania, was followed by three consecutive wins in eastern Canada. A week later, he continued his mastery of the sport’s premier event: The Knoxville Nationals in Iowa. Schatz led 49 of the 50 laps to win his eighth Knoxville Nationals title in the last nine seasons.

A hometown triumph the following Sunday in Minot, North Dakota, started a six-race winning streak that included two more wins in Canada and three in Washington. He scored back-to-back wins in Indiana, winning for the first time at Kokomo and Terre Haute before consecutive wins at Bloomington (Ind.) Speedway and Berlin (Mich.) Raceway the next week.

The winning continued in October with his second consecutive fall triumph at Rolling Wheels Raceway in Elbridge, New York, before earning his 26th victory of the season Oct. 18 at Fremont (Ohio) Speedway.

“This has been such a fun season,” Schatz said. “There were some rough spots along the way, but everyone kept working to get better. The guys got me a better car by trying things. I tried to become a better driver every night. It just got to the point where you were excited about each and every race and you couldn’t wait to get to the next one. That’s the goal. We had a lot of fun and that’s what makes this special for everyone. We got STP and Armor All another title. Chevrolet has another WoO championship trophy. And I’m really proud that we were able to get Crimsafe a WoO championship in their first season with us. We’re really looking forward to celebrating this incredible season, but we’ve still got some work to do first."

In addition to the historic triumphs and career-best win totals, the 2014 season has been an incredibly consistent one for Schatz and the STP team. They completed all 86 races this season and finished outside of the top-10 only seven times. Four of those seven finishes were 11th-place results. Schatz earned 13 second-place finishes, with four coming in marquee events – the Kings Royal at Eldora Speedway in Rossburg, Ohio, the Summer Nationals at Williams Grove Speedway in Mechanicsburg, Pennsylvania, the Ironman 55 in Pevely, Missouri, and the Morgan Hughes National Open at Williams Grove. The WoO title puts an exclamation point on a year that included 48 podium finishes amid extreme consistency.

Stewart, the three-time NASCAR Sprint Cup Series champion and owner of the No. 15 STP/Armor All/Crimsafe J&J machine, is extremely proud of the team’s effort.

“I’m proud to have such a quality group of people representing Tony Stewart Racing and all of our partners,” Stewart said. “What Donny and his guys – Ricky (Warner), Scuba (Steve Swenson) and Eric (Prutzman) have done the last couple years is something special. Winning 48 races in two seasons is remarkable. Donny is a true champion and an incredible ambassador not only for TSR, but for the entire sport of sprint car racing. He’s never lost sight of the ultimate goal – winning the championship. I know it was really difficult last year for them to come so close to winning the championship, but the entire team never quit getting better. They did an outstanding job in bringing TSR the title this year.

“It’s really gratifying to win another championship with our partners Armored Auto Group and their STP and Armor All brands. Their commitment to TSR has been a true asset to our organization, and being able to deliver another championship to Chevrolet is something we take a lot of pride in. This is a championship for all of our partners to be proud of – Bad Boy Buggies, Crimsafe, J.D. Byrider – everyone plays a part in our success.”