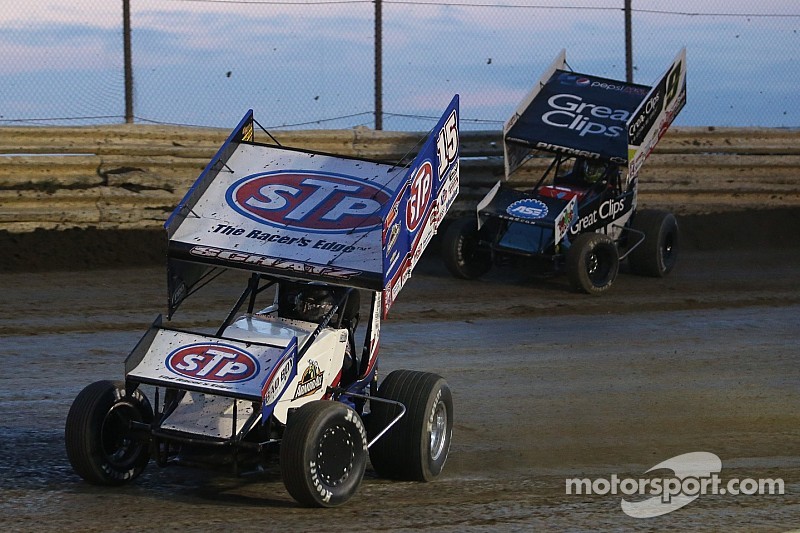 Through the ups and downs of an 88 race season, Donny Schatz and his No. 15 STP / Armor All Tony Stewart Racing team maintained the consistency and displayed the dominance necessary to score a sixth World of Outlaws STP Sprint Car Series championship.

Schatz, who has won his six championships in the last nine seasons, was honored Sunday night in front of his fellow competitors at the annual World of Outlaws 'Night of Champions' banquet.

"I've got to thank Tony Stewart for giving us the tools and allowing us to build the success we have. There's a lot of people involved to make that happen," Schatz said. "STP has been a huge part of that. Thank you STP for allowing us to grow your brand, expectations and ours. Armor All, Chevrolet, Bad Boy Buggies, Crimsafe. Thank you for letting us help you grow your brands into the future."

Schatz thanked his family for their support in his career and throughout this season.

"(Crew members Ricky Warner, Steve 'Scuba' Swanson and Eric Swanson) - I don't know what you say," Schatz said. "Enough can't be said about you guys. What you guys did this year was unbelievable. I know how hard you work to do it. I know you'll work super hard to do it again.

"It's hard or nearly impossible to explain the great season that we had. I don't know that you can ever do anything like this again. We're going to try our best but you just never know. All year long I've just been living for tomorrow and right now, I just want to live for today."

Schatz has won six of the last nine titles. Only 20-time champion Steve Kinser has more titles than Schatz.

Over the course of the season Schatz compiled impressive statistics - 26 wins, the most of any single season in his career, 63 top-fives, 80 top-10s and eight quick time awards. He also compiled more points than any other driver in series history, surpassing Steve Kinser's 1991 record of 11,236 points with 12,427 points.

"When it comes to Donny, there hasn't been a more dominant sprint car driver in the last 10 years," Frood said, reading a note from Stewart. "We were lucky enough to have him join us in 2008 and he picked up right where he left off in 2007 by winning another championship. That championship level consistency is due in large part to the chemistry, specifically the chemistry between Donny, crew chief Ricky, Scuba, crewman Eric. The best driver is paired with the best team and they have proven to be a hard combination to beat."

"We're very proud of (Donny) and all the guys," Frood said.

This is the fourth championship for Tony Stewart Racing which had previous wins with Schatz in 2008, 2009 and 2012 and with Danny Lasoski in 2001.

Ricky Warner, Schatz's crew chief, took home honors as the 2014 Crew Chief of the Year. He thanked his family and crew members

"(Thank you Donny) for letting me be a part of the history of our generation," Warner said.

In addition to the championship, other honors were presented throughout the night.

"Well, thank you. All this stuff makes this hard to give up. But I'll think about it when I'm running down the road," Kinser said. "The racing part, the people, it's been my life. I'm happy to have had the career I did. I'll be down watching some races and participating somehow."

Schatz, in his championship remarks, echoed the sentiments of all the night's participants who saluted Kinser on his extraordinary career.

"You've made this sport what it is today no matter what anybody says," Schatz said. "You've allowed us - guys like me - to turn our dreams into a reality. No questions about it. Things aren't going to be the same without you here."

Sweet Rookie of the Year

Brad Sweet was named the 2014 Kevin Gobrecht Rookie of the Year award recipient as he completed his first year on the series tour. Sweet and his No. 49 Surepoint Medical Kasey Kahne Racing with Mike Curb team won five times in 2014, compiling 29 top-five finishes, 59 top-ten finishes and two quick time awards.

Sweet thanked his team owners Kasey Kahne and Mike Curb and his crew members for a successful first full season. He said he looked forward to the opportunities in 2015.

Tommie Estes Jr. was named the 2014 Promoter of the Year for his work around the annual Boothill Showdown at Dodge City Raceway Park.

"We try to make it fun for all of our fans to come to," Estes said. "I appreciate you guys when you come in and race. I don't try to screw things up - I try to make them better. And hopefully next July 3 and 4 we will see all you sprint cars back (in Dodge City) again."

Scott Gerkin, the longtime crew chief for Steve Kinser, was presented with the Ted Johnson Memorial Award for Outstanding Contribution to Sprint Car Racing. Gerkin, who has spent more than 30 years around sprint car racing, was lauded for his work with Kinser and as an innovator in the sport.