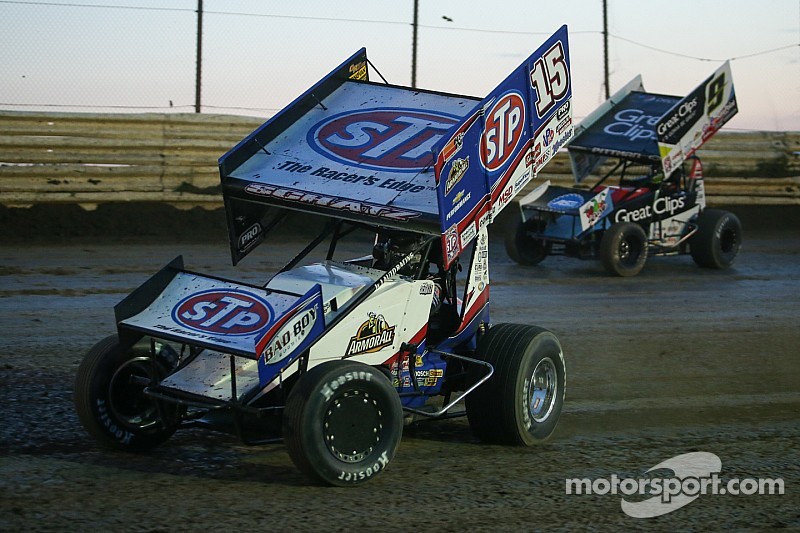 It was the second win in a week for Schatz as he took over the points lead.

CHICO, Calif. - Donny Schatz scored his third win of the season Saturday night at Silver Dollar Speedway's Mini Gold Cup, but his competition did not make it easy for him.

Schatz led the field through the opening laps in his No. 15 Bad Boy Buggies car and held off Daryn Pittman as a series of cautions flew. The first caution came on lap four, followed by one on lap nine and then on the subsequent restart attempt. After Rico Abreu got off track and brought out the caution on lap 11, Kerry Madsen was able to battle past Pittman to take over the second position. Terry McCarl brought out a pivotal caution on lap 18 as he spun into the infield off of turn two.

As the field returned to green, Kerry Madsen got his opportunity to take on Schatz.

Towards the end you could feel the tires were going and you were sliding around,

"I know my crew was probably calling me every name in the book on that restart but it started to lay a little rubber there and you're damned if you do and damned if you don't," Schatz said. "And I figured if I could get a run off the top. Kerry just got a really good start."

When the field came around to take lap 18, Madsen led Schatz in his No. 29 American Racing Custom Wheels car. Farther back, 18-year-old Tanner Thorson, who started the night in 13th, had been slowly progressing through the field. On lap 18, as Madsen battled past Schatz, Thorson took over the eighth spot.

Schatz began to catch Madsen again on lap 23. Schatz worked the track looking for the right line and almost had it as the two drivers came off of turn four headed to the start finish line. They battled side by side, but Madsen held the lead. The battle continued on laps 24 and 25. As they looked to complete lap 26, Schatz finally found a way around Madsen.

"I pushed pretty hard for a while but it got the rubber down in the middle and we were just a little too tough for the rubber," Madsen said. "Obviously Donny was way better."

By lap 27, Thorson moved his Richie Rich Motorsports car into the sixth position. One lap later, Schatz, the leader, caught lapped traffic and begin to work his way through. This closed the gap for Madsen, who tried to use the traffic as a pick around Schatz. Schatz was able to maintain the lead though.

Over the course of four laps, Thorson swiftly moved forward to the third position. In traffic, he found a way around Madsen on lap 36 to take over the second position. He set his sights on Schatz. While Schatz had built up a strong lead, Thorson cut into it lap by lap.

"Towards the end you could feel the tires were going and you were sliding around," Schatz said. "We ran the hardest thing we could. Racing with Kerry we probably used them up more than we should have but it got us the win so that's what's important."

In the end, Thorson ran out of time to catch Schatz

"We were really good there in the beginning all the way throughout the race and I feel like a few more laps and I probably could have given Donny a run for his money," said Thorson, who finished the night in second. "Good job to him."

Schatz's win was the second in a week. Prior to his win last weekend, the Tony Stewart/Curb-Agajanian Racing driver had not won in California since 2012. He credited his team for trying new things and adapting.

"We haven't been very good on the short track stuff the last several years," Schatz said. "They've worked hard and tried things outside the box trying to get better. It's worked. Half the battle is getting qualified. And they've definitely got it qualifying better."

After leading eight laps, Madsen finished the night in third - his best finish so far this season

"We're extremely happy to come home with a podium," he said. "Chico has never been my best track so it's been a fantastic night for us."

The St. Marys, New South Wales, Australia native also took home his fourth quick time of the year - the most of any driver.

The World of Outlaws Sprint Car Series returns to action tomorrow night at Antioch (Calif.) Speedway on March 29. Tickets are available at the ticket booth in Antioch.