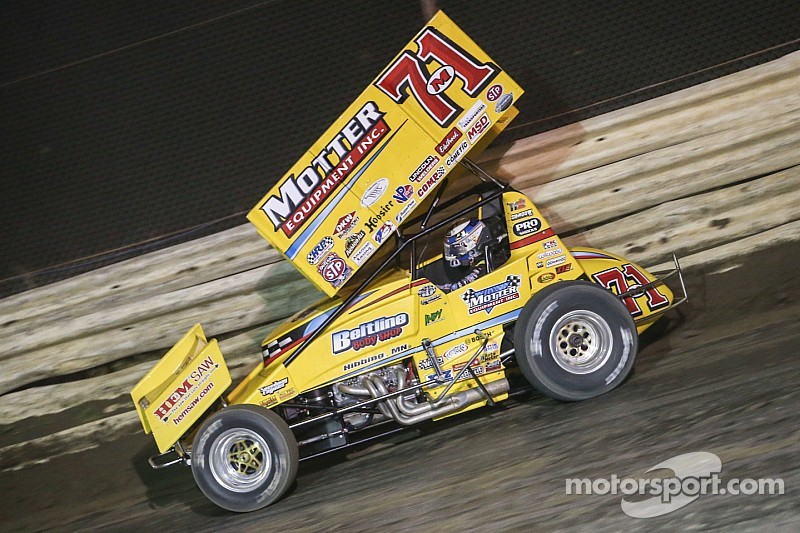 Baberville, Fla. – The first night of 2015 World of Outlaws competition kicked off tonight at Volusia Speedway Park, the world’s fastest half mile.

After one night of open practice and two nights of All Star Circuit of Champions competition, the Motter Equipment HE&M Saw Beltline Body Shop team with veteran driver Joey Saldana on the throttle, were ready to get the Outlaws season started.

Saldana was the first driver on the time trial clock and was fourth in the final 32-car field qualifying order with a best lap of 12.861 seconds.

The Brownsburg Bullet started fourth on the grid of the fourth heat race. When the green flag dropped, pole sitter Donny Schatz assumed the lead while Saldana executed a masterful maneuver squeezing past outside pole sitter Sam Hafertepe, Jr. on the high side of the track to vault to second place. Schatz and Saldana held their positions to the checkered flag, both making the dash and both earning a spot in the A feature.

The ‘six’ ping pong ball was pulled in the inversion draw, consigning the Bullet to the fourth starting position. The evening was filling with a plethora of ‘fours’…No. 4 qualifier, started fourth in the fourth heat, started fourth in the dash. At the green, Greg Hodnett led the field and Saldana ‘worked the room’ once again, driving up the middle of the track and then on the high side to take second place. Hodnett and Saldana maintained their positions to the checkered flag.

When the field was unleashed, Hodnett vaulted to the lead with Saldana in second. Daryn Pittman’s slide job and attempt to pass Saldana in the opening lap of the race proved unsuccessful. Saldana began to reel in the leader and on lap six, the Bullet slid to the inside of Hodnett to go to the front of the class.

A restart after a caution on lap seven was short-lived when Craig Dollansky rolled, bringing out a closed red flag. Because there was a crash on a double file restart, the next attempt was a single file restart. Saldana launched into the lead, but second place runner Greg Hodnett clipped the cone and was penalized two positions.

The restart order was Saldana, Pittman, Schatz and Hodnett. Saldana remained in the lead and began to pull away from the field and encountered traffic as the race neared the halfway mark. Schatz took second from Pittman and set sail for Saldana. But Pittman came back at Schatz and the two engaged in a side-by-side duel. With six laps to go, Schatz was closing on Saldana and was able to wrestle the lead away from the Bullet on lap 26. Caught in traffic, Saldana got out of rhythm for a couple of beats which allowed Pittman and Hodnett to pass. At the white flag, Pittman took the lead from Schatz and went on to win the race. Schatz was second, Hodnett third, and Saldana drove home fourth.

“Hats off to Garrett with CSI shocks, Rick and Jay from Speedway Engines and Dave from Wilwood brakes for all their assistance tonight and during the time we’ve been at Volusia,” said team owner Dan Motter. “It was a collaborative effort by these folks and our team that helped us make big strides to get a good start on the season. Tonight we just made little adjustments that made the car better and better. We have good notes to build from for tomorrow and Sunday and Joey is doing a great job in the cockpit.

“We will be back for round two tomorrow.”