EDMONTON, Alberta - Aug. 23, 2013 - Kerry Madsen avoided mayhem behind him and powered to victory during Friday's opening night of the Oil City Cup at Castrol Raceway for his third World of Outlaws STP Sprint Car Series victory of the season.

Madsen earned the pole and was able to keep his Keneric Racing EarthEx KPC out front, which was key on a night where several of the contenders were caught in separate incidents, including a nine-car melee that collected 20-time champion Steve Kinser and championship points-leader Daryn Pittman.

Five-time champion Donny Schatz charged nine positions to eventually finish second in the 30-lap feature. He has finished third or higher in every event since the Kings Royal on July 16 as he has charged up the standings in his quest for a sixth series crown.

Madsen jumped out to the early lead with Cody Darrah and Kraig Kinser battling back-and-forth for second. Both tried to make the top of turn four work but it would cost Darrah and Kinser as they both slipped up exiting the corner and lost several seconds to Madsen.

An early caution gave Darrah another shot at a double-file restart, but again Madsen secured the lead. Caution flew again as Craig Dollansky rolled to a stop with a flat tire in turn one on lap 15 with the top three remaining in the same order. By lap fifteen Schatz was running in the top 10 and passed Pittman, who started fourth. 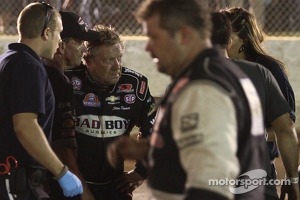 All drivers walked away when disaster struck for nine cars on lap 23 in a chain reaction crash on the front-stretch. Steve Kinser, who was running fifth, flipped as other cars piled in. While Schatz was able to slip through, Pittman was not as fortunate. Pittman's Kasey Kahne Racing crew worked quickly to get him back into the race, where he finished ninth to mitigate the damage to his championship lead.

Still with 7 laps to go, the field was lined up for a single-file restart. Cody Darrah was running second when something appeared to break in his car and he veered into the inside wall of turn one ending his night. On the ensuing restart, Schatz had moved up to fourth and battled McMahan third. McMahan glued his car to the bottom of the track while Schatz moved just half a line up through the corners. With five to go, Schatz moved to third and set his sights on Sweet, getting him with two to go.

Madsen, though, was too strong for even Schatz to catch on Friday night as he motored to his third victory of the season. Madsen has now won in his native Australia as well as in New Zealand, the United States and Canada.

"The bottom was so slow and we had a good car down there, it was really do I go up there or don't I?" questioned Madsen, of St. Marys, New South Wales, Australia, whose first two wins this year came at Eldora Speedway. "I made the mistake once on a restart and nearly got passed, but luckily for me there was another caution. Darrah could pull even with me off of two, but the bottom was the place to be in three and four. I moved up in one and two to take the air off him and that seemed comfortable and I wouldn't hear anything. I'm just happy to get the win."

Schatz, who has a series-high 16 wins this season, continued his assault on the championship with the second-place finish in his STP/Armor All J&J.

"We just didn't get moving soon enough, but towards the end of the race the track changed our liking," said Schatz, of Fargo, N.D., who was the KSE Hard Charger for the seventh time this season. "When you get things close, these guys can really fine tune things and that's really important. We're just trying to win all the races we can and do the best job we can every night. We'll come back tomorrow and try to get the win."

Sweet again made the most of his limited time on tour by rounding out the podium in his Kasey Kahne Racing Ollie's Bargain Outlets car.

"We were good all night," said Sweet, of Grass Valley, Calif., who set quick time for the first time this season. "We qualified quick time, started sixth in the dash and finished seventh. I felt like our car was as good as anyone at times, just maybe needed a long green run. All in all we survived the mayhem that was tonight and brought it home third. We'll get better and hopefully pick off a few of these wins."

NOTES - Brad Sweet was the fastest qualifier around the 3/8-mile paper clip shaped track with a time of 13.292 seconds to earn five championship points. Also earning points were Joey Saldana (4 points), Kraig Kinser (3), Daryn Pittman (2) and Kerry Madsen (1). ... Sammy Swindell, Paul McMahan, and Steve Kinser won heat races. ... The dash draw was a 6 for the 31st time this year. ... Kerry Madsen won the dash for the second time this year.