Madsen wins at Antioch in closest Outlaws finish ever 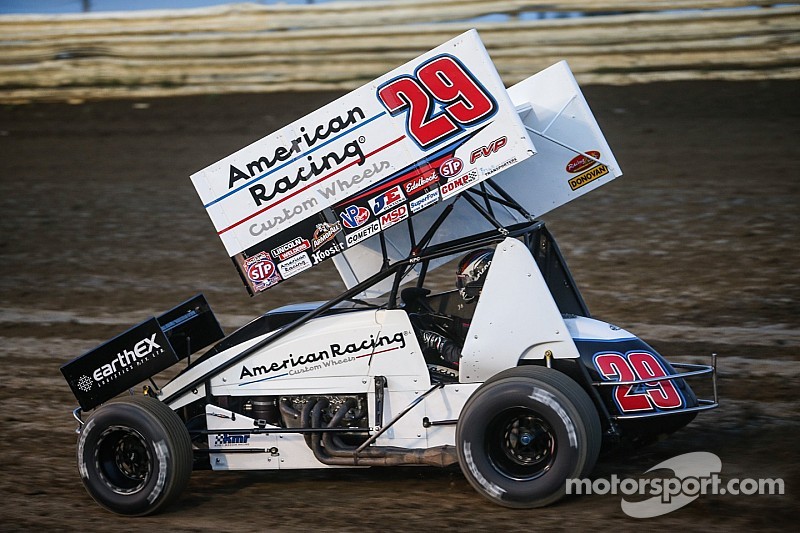 He scores his sixth World of Outlaws STP Sprint Car Series win of the season after holding off Kyle Hirst by .005 seconds

Kerry Madsen scored a win for the record books Sunday night at Antioch Speedway as he held off Kyle Hirst by just .005 seconds, the smallest win margin in World of Outlaws STP Sprint Car Series history.

Madsen took over the lead on lap seven as the field returned to green following a caution. Madsen, who at the time was running in second behind reigning series champion Daryn Pittman, looked low as Pittman got caught up in the cushion and fell back.

Now leading, Madsen quickly built up a comfortable lead in his American Racing Custom Wheels car. By lap 11 he hit lapped traffic. As he worked his way through, Hirst crept closer.

As Madsen took the white flag, Hirst looked for an opportunity. He found it as the two entered the final turn. With Madsen bottled up by a lapped car, Hirst entered onto the front stretch side-by-side with the Australia native. The two drag raced down to the checkered flag and Madsen claimed the win by just a fraction of a second.

"It felt like I was doing it comfortably and managing traffic pretty well but I just got bottled up there and I guess he got a run," Madsen said. "I was pretty lucky to get away with that one."

Madsen said as the race wore on and he fought his way through the lapped traffic he was not concerned about what was going on behind him.

"I tried to keep the race pace at a comfortable pace so I wasn't getting bottled up," Madsen said. "The start was important but I think you had to be able to maneuver traffic to win the race."

Madsen said it was an exciting race from where he sat.

This was the sixth World of Outlaws STP Sprint Car Series win of the season for Madsen and the first since he won the Ironman 55 just over a month ago. He currently sits fourth in the championship standings, 480 points out of the lead.

For his part, Hirst said he was disappointed to let the win get away from him by such a small margin.

"That would happen to me! I wish I was on the other end of that but that's alright," said Hirst, the KSE Hard Charger Award recipient for the night after advancing six positions in the A main. "I'll get one, one of these years."

Hirst came into the night with the momentum of his performances at the Gold Cup Race of Champions. In the previous two nights in Chico he finished fifth and fourth. Tonight, Hirst came as close as he could to the win without capturing it.

"Yeah, I thought I had him," Hirst said. "I wasn't sure - it was going to be close… My Roth Motorsports team gave me a great car. This thing was awesome." "

"God I wish I would have had that one."

Hirst's Roth Motorsports teammate David Gravel finished the night in third after starting in third. Gravel fell back on the start but he was able to make up ground on the same restart Madsen took over the lead.

"We freed up all night but I was still flying the front end," Gravel said. "We had a good car, just missing it a little bit on the exit. We wanted a top-three and we got one. Good thing for Kyle, he's had a great weekend. And congrats to Kerry, he did awesome too."

"That one restart there with everyone biking on two wheels was pretty crazy and we took advantage of it. I've got to thank Dennis and Teresa Roth and all my guys."

Donny Schatz's lead in the championship standings is currently at 196 points over second place Pittman. Paul McMahan remains firmly in third, 306 points out of the lead.

The World of Outlaws STP Sprint Car Series next returns to the Upper Midwest for The Arnold Motor Supply Shootout at the Clay County Fairgrounds in Spencer, Iowa on Sept. 12 and the ASGROW/DEKALB Clash at the Creek at Deer Creek Speedway in Spring Valley, Minn. on Sept. 13.

Schatz stood in victory lane as the winner at Skagit Speedway

Myatt Snider to debut in Xfinity Series in 2020 with RCR