Paul McMahan takes lead on lap 19 of FVP Outlaw Showdown, holds off Kinser in the final laps for first win of 2014

McMahan surged to the lead past Kerry Madsen in traffic on lap 18, then held off Steve Kinser on a green-white-checkered finish to become the fourth different winner this season in four events. 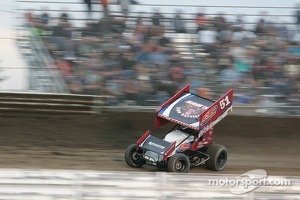 Kinser gave it everything he had but was unable to drive past McMahan, settling for a runner-up finish as Brad Sweet blew through the field and finished third after starting 16th. Joey Saldana was fourth after spending much of the night battling for a podium position and Donny Schatz rounded out the top five.

Madsen jumped to a strong lead, but a spin caused a caution and a complete restart. On the second start McMahan was ready and able to keep pace with Madsen before a caution on the next lap.

Kinser worked his way up into a battle with McMahan for second as Madsen continued to lead. Then McMahan made his first charge for the lead after a lap-five restart, working the bottom of the track with Madsen working the top.

A long green run saw the field enter lapped traffic beginning on lap 15. On lap 18, a lapped car on the top of the track gave McMahan the hole he was looking for. With Madsen slowed on the top, McMahan and his CJB Motorsports #51 machine charged on the bottom to lead lap 19.

McMahan would not go unchallenged in the waning laps of the race as Steve Kinser tracked down the California native. However, McMahan was able to hold off Kinser and take the win in the 30-lap feature as early leader Madsen was forced out of the event after contact sent him into the wall, collecting Jason Sides at the same time.

"We weren't really good in the heat race, and I just came in and told them what we needed to do and they made the adjustments and it made my job real easy," said McMahan, of Nashville, Tenn. "We had a good restart and come around to get the white and we had a crash and I had to do it all over again. It's pretty cool, I can check Vegas off my bucket list now and I've got a little more money to play slot machines this weekend."

For Kinser it was the second consecutive race where he was running up front following his victory last month in Florida.

"We were in the race and as long as we're in the race, I'm not going to complain," said Kinser, driver of the Bad Boy Buggies #11 from Bloomington, Ind. "I didn't make any changes [under red for Jason Johnson], I felt about as good I was going to do. I didn't know what to change so I just left it alone. We've made chassis changes, a lot of motor changes and all different combinations to feel what helps these tires."

Sweet was definitely on the move in the feature, looking for his second win after capturing the season opener.

"The track was awesome tonight," said Sweet, of Grass Valley, Calif. "The #49 is optimistic after the strong run through the field that they have a starting place for tomorrow. "I'm happy that we've got something to tune on for tomorrow."

Contact between Sweet and Madsen brought out the green-white-checkered finish for the event. In victory lane, Sweet admitted his fault, "I've got to apologize to Kerry Madsen. We got together late in the race. I didn't mean to run over him. I changed lanes a little faster than I wanted to and it's my fault. I take the blame for that one."

Sweet's 13-place charge through the field would not earn him the KSE Hard Charger Award as Rico Abreu charged from the 21st starting position to finish seventh and pick up 14 positions in the process.

The win allowed McMahan to take the sole lead in the World of Outlaws STP Sprint Car Series championship point standings. Sweet trails by 12 with 2013 World of Outlaws champion, Daryn Pittman 15 behind. Donny Schatz trails by 21 and Steve Kinser 26 points out.

The World of Outlaws STP Sprint Car Series wraps up the FVP Outlaw Showdown tomorrow night at The Dirt Track at Las Vegas. Gates for the event open at 5 p.m.

Dominic Scelzi to start World of Outlaws in Vegas