Sammy Swindell wins 'Knight Before the Kings Royal' at Eldora 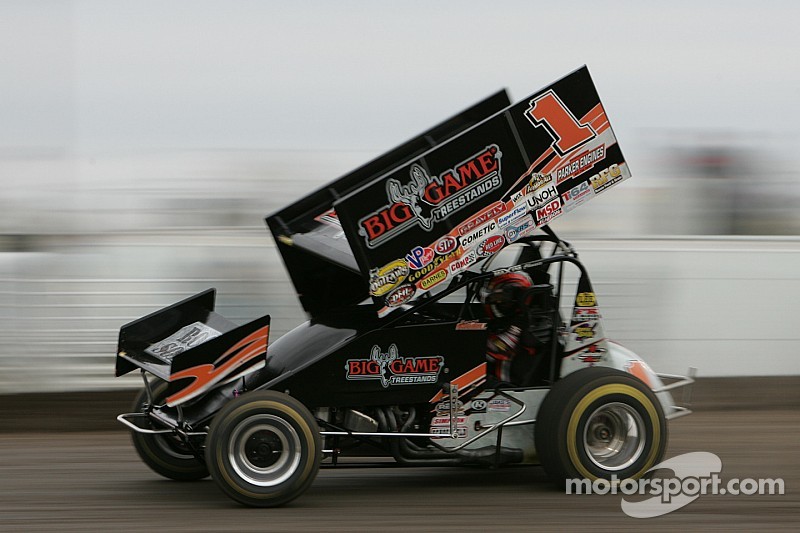 After a string of near wins and some bad luck, three-time champion Sammy Swindell forged ahead Friday night, pushing back a challenge from non-Outlaw Tim Shaffer and winning the Knight Before the Kings Royal, his second World of Outlaws STP Sprint Car Series win of the season.

"It's great - after the year we've had… We've been right there the last few races, just couldn't pull it off at the end and tonight the car just got better and better," Swindell said. "The Big Game Treestands car and team did an awesome job."

Swindell has led at least part of three of the last four races - including the last Outlaws event at the Brad Doty Classic at Limaland Motorsports Park, where he dominated early but fell off toward the end of the event. At the first night of the Boot Hill Showdown in Dodge City, Kan., Swindell picked up the pole for the A main, but had his night ended in the first turn of the first lap, after Paul McMahan made contact with him and Swindell flipped.

Friday night at Eldora, Swindell put all of that behind him.

Shaffer, who sat on the pole, jumped out to an early and dominate lead after a short battle with Swindell to begin the A main.

"We were a little bit too tight at the start, let Shaffer get away," Swindell said.

By lap five, Shaffer hit the first lapped traffic in his Canton Electric car but pushed through undeterred. Swindell however was in hot pursuit and by lap 13 had caught Shaffer. Swindell made the pass in his Big Game Treestands car through turns three and four and drag raced Shaffer into one and two. By the time the two cars hit the backstretch, Swindell firmly had the lead.

"Once I got in the front I was just trying to pace myself," Swindell said. "I didn't hear anybody or see anybody - I was just running some nice laps and then trying to keep the car under me."

The first yellow flag in what would become a series in the middle of the feature fell on lap 16 after Joey Saldana's right rear tire shredded. Once the green flag again flew, only two laps passed before contact between fourth-place Kerry Madsen and fifth-place David Gravel left Gravel at the bottom of the front stretch. Another short green with 18 complete, ended before the first lap could be completed with Brandon Wimmer on his roof after flipping.

The green flag flew for the final time with 18 complete. The final 12 laps saw battles between Kerry Madsen and Jac Haudenschild, and Madsen and Pittman, as Shaffer looked for one last chance.

"It was really awesome here tonight… Everything fell in place," Swindell said. "If we can keep that up, we might win a couple more."

Shaffer, who was pulling double duty Friday night, competing with the Outlaws and in a separate 360 sprint car, said running as well as he did felt great.

"I screwed up in lapped traffic," Shaffer said. "I got there and I got my timing wrong. I was trying too early and I know better. Hopefully we learned a few things for tomorrow. It feels great to be up there in second."

"I've just got to thank everyone that's been helping me and been behind me - all the guys, Pete and Tony; my wife Amy," Swindell said. "Everybody knows that helps me."

In the midst of all the excitement, two people Swindell forgot to thank were his longtime team owners Tod and Lisa Quiring. Swindell often credits the Quirings as his biggest and most strident supporters.

Swindell heads into the Kings Royal on Saturday night as a three-time winner of the event and looks to become the first winner of both the 'Knight Before' and the Kings Royal since 20-time champion Steve Kinser did it in 2003.

Kerry Madsen drove his American Racing Custom Wheels car to a third place finish - his sixth podium finish in a row. He said he had a really good car all night, but struggled on the restarts. Tempers flared on track and off between Madsen and Gravel, and Madsen and Pittman in the closing laps as the three drivers battled for position.

"There at the end of that run I had a quicker car than the two cars ahead but there really wasn't much I could do unless they made a mistake in front," Madsen said. "And then when someone made a mistake you had to commit to it and go for it - that's part of racing at Eldora."

"Just trying to bring it home every night - that was a tough battle."

The battle for the championship continues to tighten as Donny Schatz's points lead shrunk again over Pittman to 66. Paul McMahan remains in third, 85 points out of the lead.

The World of Outlaws STP Sprint Car Series returns to Eldora Speedway Saturday night for the Kings Royal. The Outlaws return to Pennsylvania next week for a four race swing that will take them to Lernerville Speedway, Lincoln Speedway and Williams Grove Speedway.