Schatz goes four for five in Indiana with Bloomington win 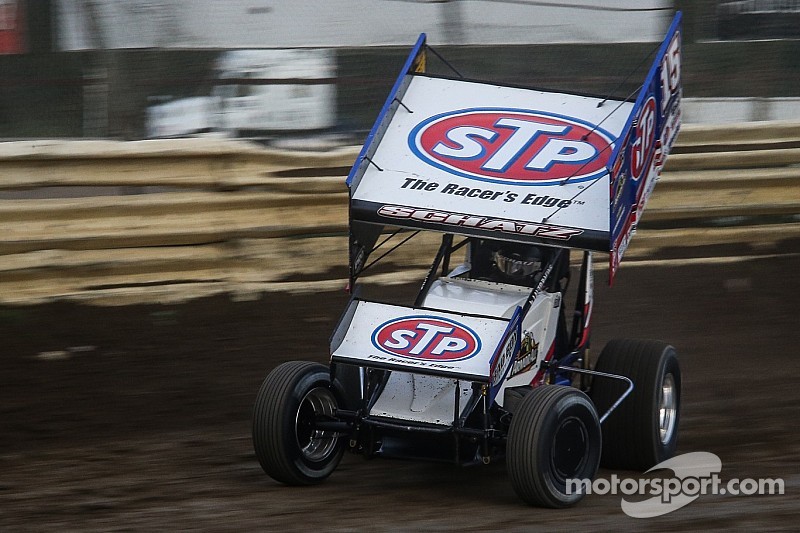 With 23rd win, Schatz ties 2013 for the winningest season of his career

It was 19-year-old Christopher Bell who provided Schatz with his fiercest competition. Bell, who has one World of Outlaws win this season despite having just a handful of starts with the series, took over the lead from Jac Haudenschild early on in the feature and built on it as Schatz advanced forward.

By lap 10 Schatz had caught and was challenging Haudenschild for second. Schatz cleared Haudenschild two laps later and set his sights on Bell.

There are a lot of guys from the shop here tonight and it's cool to win close to the shop for these guys.

As the field went around to complete lap 19, Bell hit lapped traffic in turn one. Schatz went to the bottom while Bell rode the cushion at the top. As the two drivers exited turn two side-by-side, Bell jumped the cushion.

"We got down there in the lapped traffic and I was really good when I could run the top at my speed but as soon as I had to slow down for other people I got myself into trouble," Bell said. "It kind of surprised me that I didn't end up on the other side of the banking."

Bell gave up the lead to Schatz but managed to hang on to second.

As much of the field ran high on the cushion, Schatz looked for other ways around the track.

"It was pretty touchy on the cushion," said the Tony Stewart Racing driver. "I just did the best I could somewhere else. We could roll the bottom; we could roll through the middle… You need that lapped traffic to get them opportunities to race with guys and come through the field."

By the end of the feature Schatz had built up a lead of nearly an entire straightaway in his STP/Armor All car. He was never seriously challenged again.

Just felt like I just made way too many mistakes too early and was too cautious,

This was Schatz's fourth Indiana win in a row. With his win, he claimed four of five races in the Hoosier state this season.

Schatz's win also tied this season with 2013 as the winningest of his career. It has been more than a decade since a driver other than Schatz has won 23 or more races - 20-time champion Steve Kinser won 25 during the 2003 season.

"It's unbelievable. It's been a great year," Schatz said. "This race team is unbelievable - what they keep providing for racecars is awesome. There are a lot of guys from the shop here tonight and it's cool to win close to the shop for these guys. We had a good run in Indiana. Being in the King's hometown and getting the win, that's pretty cool."

These guys gave me an awesome racecar tonight and just came up one spot short.

Bell had his hands full the remainder of the feature with Haudenschild and Daryn Pittman.

With 11 to go, Pittman got around Haudenschild and moved back into the third spot. As the laps wound down, Pittman managed to get the nose of his Great Clips car under Bell, but was never able to clear him.

Bell said he needed to work on being able to run other lines around the track in his CSI Shocks/Foxco/Hinkle Hamburgers car.

"I think my car was pretty good," he said. "It was just me trying to figure out how to use my feet together as well as keeping the tires underneath me. These guys gave me an awesome racecar tonight and just came up one spot short."

Pittman, the defending Outlaws champion, started the feature in third, but fell back early as Schatz made his charge to the front. Pittman said with Schatz's growing points lead he needs to quit focusing on the championship and start taking some risks to win races.

"Just felt like I just made way too many mistakes too early and was too cautious," said the Kasey Kahne Racing driver. "I've just got to get more aggressive. It's a good night for us after last weekend. We had probably one of the toughest weekends we've had as a team - two back-to-back nights that we really struggled. It's good to get back on the podium but we really need to win a race and that starts with me."

Earlier in the night David Gravel toppled Joey Saldana's track record at Bloomington Speedway after turning a quick time lap of 9.304. It was Gravel's 11th quick time of the season, the second most of any driver.

The World of Outlaws STP Sprint Car Series heads north to take on Berlin Speedway in Marne, Mich. for the first time ever on Saturday. The series then heads back to Williams Grove Speedway for the final time this season to take on the Pennsylvania Posse at the National Open on Oct. 3 and 4.