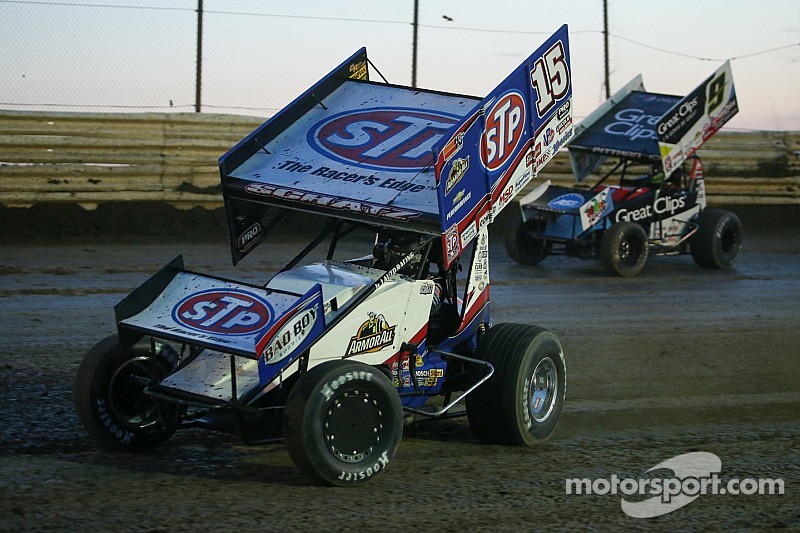 Barberville, Fla. - Nothing could keep Donny Schatz down Saturday night as he looked for his first World of Outlaws Sprint Car Series victory of 2015 on night five of DIRTcar Nationals sprint week at Volusia Speedway Park.

A solid night turned to potential disaster for the Tony Stewart/Curb-Agajanian Racing driver when he developed engine trouble during his second place Dash run.

"We broke a valve spring in the dash with two laps to go," Schatz said. "We could have taken the chance to run the engine."

The team opted not to and began the scramble to replace the engine with just the Last Chance Showdown separating them from the feature. As the field began rolling out to the racing surface for the A main, Schatz's team pushed the No. 15 Bad Boy Buggies car out, fired the engine and prepared for the 30 laps ahead.

"We did not get a chance to adjust the racecar there," Schatz said. In spite of that, Schatz delivered a stand out performance.

Kinser finished the night in third

Steve Kinser led the field to the green flag but it was Joey Saldana who led the first lap. From his third place starting position, the 'Brownsburg Bullitt' powered past Schatz and Kinser. Kinser faltered through the early laps and slipped back.

"I couldn't get off of one and two," said Kinser, a 20-time World of Outlaws champion. "I should have known as slow as I was to jump up on the top and that's the only place I could run. Instead I sat there and ran myself back to fifth and then just had to run hard."

As Kinser fell back, Schatz began to reel in Saldana. On lap seven, Schatz got the opportunity he needed, catching Saldana off of turn four. Schatz had the advantage as the two headed into turn one. Onto the backstretch, Schatz led with Saldana in pursuit. Through turns three and four, Saldana tried to retake the position, but Schatz held him off.

As the six-time champion built up his lead, Lasoski began challenging Saldana for second - a position he took over on lap 15. With Kinser moving forward, he and Saldana began a pitched battle for the third position. The two drivers traded the position back and forth for much of the next 10 laps.

"I saw him there one time," Kinser said of seeing Saldana behind him. "I finally caught [turn] two a little better and down the back chute. Once I did that I thought I was alright. I definitely killed the tires but we're not going to complain." Kinser finished the night in third with his No. 11 Bad Boy Buggies car.

Lasoski finished the night in second

Lasoski, the 2001 World of Outlaws Sprint Car Series champion, worked to catch Schatz in the closing laps but was not able to chase him down.

"[The track] took a little rubber off of two up on top and I didn't know it was there," Lasoski said. "I kept slipping up and accidentally found it. I see why Donny was getting such a shot down the backstretch but that's why he's a six-time champion." Lasoski finished the night in second.

After a late engine change and 23 laps led, Schatz credited his crew for their hard work and perseverance through the night. It was the 174th win of Schatz's career.

"They do a phenomenal job," Schatz said of his crew. "They got us out for the feature. Like I said, it wasn't pretty. We needed to make some adjustments - we just didn't have the time. So the car wasn't the greatest but it managed to get a win. I'm happy about it. I was really wanting a gator."

Greg Hodnett maintained the lead in his quest to win the DIRTcar Nationals sprint week championship and the coveted 'Big Gator.' He leads Daryn Pittman by five points. Pittman's Kasey Kahne Racing with Mike Curb teammate Brad Sweet is third, 23 points out of the lead.