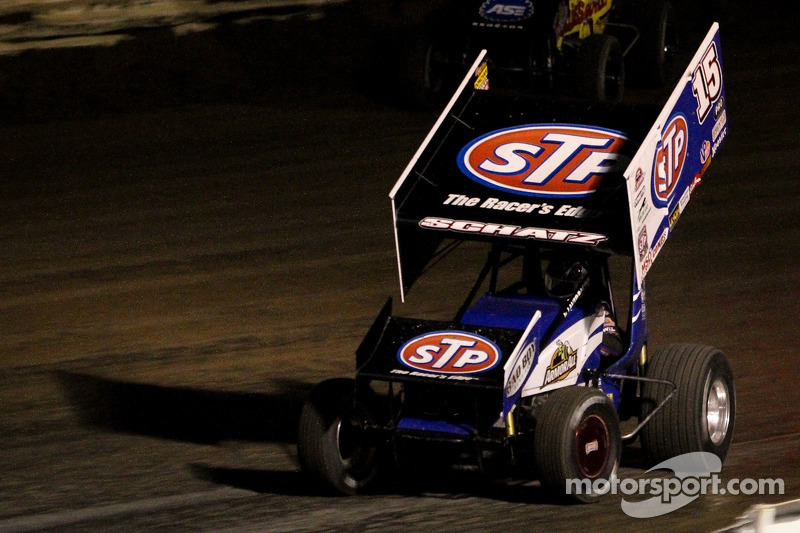 The month of May for the World of Outlaws (WoO) STP Sprint Car Series is filled with a schedule of races that challenge even the most accomplished Winged Sprint car superstars.

INDIANAPOLIS (May 6, 2014) – After opening with a doubleheader on the extremely fast high-banks of Tony Stewart’s Eldora Speedway in Rossburg, Ohio, Tony Stewart Racing’s (TSR) Steve Kinser and Donny Schatz will shift gears this week and return to the short tracks with three stops in four nights. The slate opens with the Outlaws’ debut at Jacksonville (Ill.) Speedway Wednesday, continues Friday with their third-ever appearance at Wilmot (Wis.) Raceway and concludes Saturday with the series’ annual stop at Tri-State Speedway in Haubstadt, Indiana.

All three tracks pose different challenges for Kinser and Schatz, who have combined to win 727 WoO A-Features and 25 WoO titles. Kinser will look to make the quarter-mile, dirt-oval in Jacksonville the 143rd different track, and seventh in Illinois, where he’s been victorious. Kinser will drive the TSR No. 11 Bad Boy Buggies/J.D. Byrider/Chevrolet Performance Maxim seeking his 30th career victory on Illinois soil. The 20-time WoO champion has made one career start at Wilmot and that came in August 2008. Kinser qualified 20th around the 3/8-mile dirt oval and charged past 10 cars to finish 10th in the A-Feature. Saturday’s race at Tri-State is one of three Indiana stops for the Hoosier native during the World of Outlaws “Salute to the King Tour.” Kinser has won 22 times at the quarter-mile dirt oval, which is less than two hours from his Bloomington home. He won 10 of those races in 1978 and eight of his triumphs have been in WoO competition. His most recent Tri-State victory came in convincing style when “The King of the Outlaws” led all 40 laps of the A-Feature in June 2009. He’s finished 10th, sixth, fifth and seventh the last four seasons.

For Schatz, the week provides the driver of the TSR No. 15 STP/Armor All/Crimsafe J&J an opportunity to add to his growing list of venues where he’s been victorious. He does have previous wins in Illinois at Route 66 Raceway near Chicago, Tri-City Speedway near St. Louis and a central Illinois triumph at Farmer City Speedway. The five-time WoO champion has competed in both previous WoO races at Wilmot. He finished sixth in the fall of 2006 and was runner-up to Daryn Pittman in 2008. A fourth-place finish at Tri-State in the fall of 2010 has been the best result Schatz has recorded at the southwest Indiana bullring. He led the first 21 laps of the 40-lap main event that night en route to his 11th career top-10 finish there. Last spring, he started 24th and raced his way forward to finish 11th.

Wednesday at Jacksonville, the pit gates open at noon CDT and the grandstands will open at 3 p.m. Hot laps are scheduled to begin at 6 p.m. For more details, call the track at (888) 959-1432 or visit www.jacksonvillespeedway.com.

Saturday at Tri-State, the grandstands will open at 4 p.m. CDT. Qualifying is scheduled to begin at 6:30 p.m. For more details, contact Tri-State Speedway by calling (812) 768-5995, or visit the track’s official Web site at www.tristatespeedway.com.

Race fans unable to attend this weekend’s races can catch all of the action on DIRTVision.com. Fans can listen live as Johnny Gibson, “Voice of the Outlaws,” calls the action as he does at all WoO Sprint Series events on the DIRTVision.com cybercast, as well as on the DIRT Radio Network. Go to www.DIRTVision.com for more information on all the site features, including updated results from each night of racing, as well as a chat room to interact with other race fans.

With three races in three states in four days, this week is the kind of schedule you raced for so many years with the World of Outlaws. How much fun is it to go from track to track to track and compete so often in a short span of days?

“It’s great if you are doing well. We spent a lot of years racing more than 100 nights a year and had a lot of weeks during the summer months where we’d be at four or five tracks each week. It’s what we love to do and having a busy schedule like we have this week keeps you charging ahead. If you have a good night, you feel great leaving the track and can’t wait to get to the next one. If things don’t go your way, you can think about how you could have done better for a little while and then turn your attention toward the next race. We’re looking forward to this week. Any time you go to a new track and one where you haven’t been in a while, there’s a lot of excitement. The people at Jacksonville have put a lot into making this first show there a huge success. That’s what it takes. We’ll leave the shop here Wednesday morning with the goal of having three really good nights on the track and coming back after Saturday’s race feeling really good.”

The weekend races are in Wisconsin and Indiana, where you have a good fan following. Do you notice that you are a little closer to home when you compete in those areas?

“Honestly, it’s been great everywhere we’ve been this year so far. We’re making one last run at it and it seems like more and more fans are coming out to the races. I’ve spent time with so many great fans, already, and look forward to doing it as much as I can the rest of the year. I’m excited about heading back to Wisconsin Friday. My wife Dana is from that area and it’s always nice to see family and friends come out to the track. Same thing can be said for Saturday in Haubstadt. It’s not real far from home and, other than last weekend at Eldora, we haven’t raced in this area, yet, this year. I’m enjoying seeing all the people at the track and I’m hoping we can put on a great show for them.”

The journey of a World of Outlaws season takes you to all kinds of different tracks and oftentimes to new places. How will you approach Wednesday’s race at Jacksonville, knowing that you haven’t been there before?

“One of the beautiful things about the World of Outlaws is you get to experience new tracks and seeing who can adapt quickest. As a team, we really like those kinds of challenges. The STP guys (Rick Warner, Steve Swenson and Eric Prutzman) and I have talked about a game plan and we’ll start with it but, honestly, in dirt track racing, you never know for sure what’s going to happen. There are so many variables that factor into how your night goes. We’re looking forward to it.”