INDIANAPOLIS – Never in a million years could Tony Stewart Racing’s (TSR) Steve Kinser have thought a March trip to Texas back in the spring of 1978 would be such a historic weekend for short-track racing. The Indiana native was beginning his third season in a Sprint car when he and car owner Bobby Thompson decided to venture to Devil’s Bowl Speedway in Mesquite, where a renegade promoter named Ted Johnson was starting something called the World of Outlaws.

The trip was simply an opportunity to race for Kinser. Ultimately, Johnson’s World of Outlaws dream took off and became a way of life for Kinser. Thirty-seven years after that first event, Kinser and his TSR teammate Donny Schatz, along with the rest of the World of Outlaws (WoO) STP Sprint Car Series competitors return to the famous venue for the first time since 2003 for the two-night Texas Outlaw Nationals presented by American Racing Custom Wheels.

The stop at Devil’s Bowl is one of the early season highlights during this 2014 campaign being dubbed the World of Outlaws “Salute to the King Tour.” This will be the final season the 20-time champion chases the entire schedule all across the United States and into Canada. The Bloomington, Ind., native, driver of the TSR No. 11 Bad Boy Buggies/J.D. Byrider/Chevrolet Performance Maxim, is coming off a strong second-place finish Tuesday night at El Paso (Texas) Speedway Park, his best finish since posting four consecutive podium finishes early in the season. Through 15 of the 92 scheduled races in 2014, “The King of the Outlaws” has posted a February victory at Volusia Speedway Park, five top-fives and 10 top-10s. 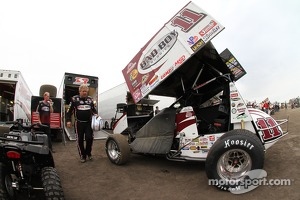 That first weekend of Outlaw racing back in 1978 may not have yielded the results Kinser had in mind, but it did lead to bigger and better things. He finished second in Friday night’s preliminary in Thompson’s red No. 86x, but had a mechanical problem in the first official WoO A-Feature March 18, 1978, led to a rather unceremonious DNF (did not finish). Things turned around quickly for Kinser, who despite the rough start at Devil’s Bowl to the 1978 WoO campaign, would take over the driving duties of Karl Kinser’s No. 11 the rest of that 1978 season and become the series’ first champion.

In his second start at Devil’s Bowl in March 1979, he won his first of eight WoO A-Features at the half-mile, dirt oval. Kinser opened both the 1984 and 1985 WoO seasons with Devil’s Bowl triumphs and his most recent victory came on March 21, 1998. He has competed in 56 of the 57 WoO all-time regular points races at Devil’s Bowl, missing only the March 1995 event while he was competing in NASCAR. Kinser has won 36 of his 577 career WoO A-Features in Texas.

For Schatz, pilot of the TSR No. 15 STP/Armor All/Crimsafe J&J, the return to Devil’s Bowl is another opportunity to add one of the Outlaws’ original tracks to his win list. The five-time WoO STP Series champion 7 months old when that first WoO weekend was staged. He first made laps on the Texas oval as a WoO rookie in 1997. A year later, he had one of his early career highlights in March 1998 when the North Dakota youngster battled wheel-to-wheel with Kinser for the victory, ultimately finishing second by a car-length.

Schatz also has ties to that first-ever WoO event back in in 1978. Jimmy Boyd won that first historic race driving for car owner and crew chief Kenny Woodruff. Woodruff worked with Schatz during the 2000, 2001 and 2002 seasons and the duo won numerous WoO races together. Schatz is seeking history himself this weekend in the Lone Star State as he looks to earn career WoO A-Feature win number 150. Only three drivers in WoO history have reached that lofty tally – Kinser, Sammy Swindell and Mark Kinser.

The STP driver comes into El Paso with impressive numbers through 15 nights of racing. He’s scored wins at Volusia in February and Las Vegas in March, is tied with Brad Sweet with a series-best nine top-fives, and has 12 top-10s. He ranks third in the standings trailing Daryn Pittman by six markers.

Several special events are scheduled for the weekend in conjunction with the Outlaws’ return to Devil’s Bowl Speedway. A special announcement from Bad Boy Buggies will be made during Friday night’s program and, Saturday, drivers from the original WoO main event field will be meeting fans and signing autographs from 4 to 5 p.m. CDT.

Looking back, is there any way you could have imagined things working out the way they have when you came to Devil’s Bowl for that first World of Outlaws race back in 1978?

“No way could I have dreamed all of this would have come from that weekend. I still remember running that first weekend at Devil’s Bowl driving a red No. 86 out of Missouri. I can still remember Ted Johnson coming up and saying we needed $40 or $50 to start a point fund. Nobody really knew what we were getting into, but it just took off from there. All I was trying to do then was hope that I could race on the weekends somewhere.

I knew when I left there I had a pretty good shot at getting into Karl Kinser’s car, and I knew that was a good, fast racecar and I would have an opportunity to do some good. I have a lot of great memories in the first couple years of running Eldora a lot and then back to Dallas and Devil’s Bowl a lot. (Devil’s Bowl promoters) Lanny and Beverly (Edwards) are such good friends, so it’ll be nice to get back to the racetrack and see them.

What’s different about racing at Devil’s Bowl? “It’s a little different track. It’s got the frontstretch a little lower and the backstretch a little higher. You sort of run uphill going into (turns) one and two, then you sail off into three and downhill into a lower straightaway. It’s a little different racetrack and always a fun track to run on. It’s a big market there, being in the Dallas area. We ran a lot of our first races there and, for me, to go back to that track is pretty special.”

It was 2003 when you last visited Devil’s Bowl and you obviously are well aware of the history of the track. What are your thoughts about the Texas half-mile heading into the weekend? “I remember when I first went there like it was yesterday. I was just rookie trying to figure it out and now, 17 years later, I’m still doing what I love. We haven’t had great success there in the past, but I’m really looking forward to getting back there. It’s definitely a unique surface, it’s tricky to be able to race there.

You look forward to that. It’s where you can be better than someone else because it’s not an easy place to get around. I look forward to trying to have a great run. Getting a win there has been elusive to us, but these STP guys (Rick Warner, Steve Swenson and Eric Prutzman) are really motivated to get us a Texas win. Las Vegas was too long ago and we’re all chomping to get that next win.”

This weekend, several of the drivers who were original Outlaws will be on hand. How special will it be for you to not only compete in front of them at Devil’s Bowl, but also get the chance to meet and talk with them? “There’s a great sense of pride when you walk into any racetrack racing with the World of Outlaws. We all love to do this. We try to do the best job we can for our marketing partners and have a little fun along the way, but you have to make it another race, and we’re there to try to win it and go on to the next one. It’s just a very unique place and, going to Dallas, there are a lot of neat things to do and see.

There’s a lot of history at that racetrack. It’s where the World of Outlaws got its start. It will bring back a lot of old memories and hopefully we’ll make some new ones. When I was 5 years old, I dreamed of doing this. Now I’m 36 and, 31 years ago, my dream started and now I live it every day. It’s great to see those guys who still have a love for the sport and come and see the fans and be a part of the festivities and all the things that go on at the racetracks. It’s definitely very humbling. I’m sure there will come a day when I get to that point when I get that opportunity, too. At this time, I just enjoy being a race driver and being part of the show.”

Salute to the King on April 25