INDIANAPOLIS (March 3, 2014) – Last year’s World of Outlaws (WoO) STP Sprint Car Series title chase played out like a 15-round title bout. Three weeks ago, the 2014 campaign opened with a solid one-two punch in the form of thrilling wins for Tony Stewart Racing (TSR) teammates Donny Schatz and Steve Kinser. The decorated champions return to action this week with a pair of races in Las Vegas Wednesday and Thursday, followed by a Saturday-night tussle in Tucson, Ariz. 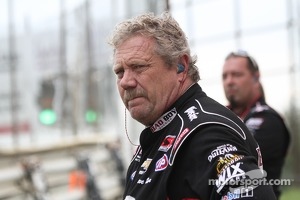 Kinser, a 20-time WoO champion, leads the Outlaws to Las Vegas for the sixth annual FVP Outlaw Showdown at The Dirt Track at Las Vegas Motor Speedway following his 577th career WoO A-Feature triumph, a fitting start to his final season chasing WoO points. Kinser’s 2014 campaign is dubbed the “World of Outlaws Salute to the King Tour,” and the 59-year-old driver of the TSR No. 11 Bad Boy Buggies/J.D. Byrider/Chevrolet Performance Maxim proved by racing to the front in the season’s third race that he is as hungry as ever to win races.

The driver who has piled up the most WoO wins in recent years has been TSR’s Schatz. The five-time WoO champion and driver of the TSR No. 15 STP/Armor All/Crimsafe J&J earned a career-best 23 WoO A-Feature victories in 2013 and put on a show in the Outlaws’ second 30-lap A-Feature of 2014, racing from 11th to first. The win was his 148th career WoO A-Feature triumph and moves him to within four wins of Mark Kinser’s 152 for third place all-time.

Schatz and Kinser have both been extremely successful at the half-mile, dirt oval in Las Vegas. The Outlaws first competed at the facility to close the 1996 season and have contested 47 nights of action. Twenty-nine of those races have been full point programs and Schatz is the winningest driver at the track with seven A-Feature wins. Last March, Schatz led the final 20 laps of the main event to score the opening-night victory and, the following night, he started on the pole and led seven laps before a flat left-front tire derailed his shot at win number eight. Kinser is a four-time A-Feature winner and has three preliminary feature wins, as well. The Bloomington, Ind., native’s most recent win at The Dirt Track came in March 2011.

Following Wednesday and Thursday’s slugfests in Las Vegas, the Outlaws will head south to Arizona to contest the NAPA Auto Parts Wildcat Shootout presented by RideNow Powersports at Tucson International Raceway. Saturday’s race will be the fifth appearance by “The Greatest Show on Dirt” at the semi-banked, 3/8-mile dirt oval. The first four races were won Paul McMahan (2006), Schatz (2006), Kinser (2007) and Daryn Pittman (2013). Kinser has won nine WoO A-Features in the state of Arizona during his illustrious career and hopes to score his 10th Saturday. Schatz gained additional laps at the track earlier this year in January, driving his Dirt Late Model in the NDLR’s Winter Extreme event, and the Fargo, N.D., racer also won the 2010 and 2011 Western World Championships in Tucson.

With three of the 92 nights of action slated for the 2014 WoO season in the books, McMahan and Pittman share the lead in the championship standings. Schatz is fourth with 423 points, 11 points out of first, while Kinser is in sixth with 416 markers, 18 back.

For both programs at The Dirt Track at Las Vegas Motor Speedway, the pit gates open at 2 p.m. PST, and the grandstands open at 5 p.m. Hot laps are scheduled to begin at 7 p.m.

Dominic Scelzi to start World of Outlaws in Vegas