Two-time Dakar Rally winner and former World Rally driver Nassar Al-Attiyah is closing on a deal to race in the World Rallycross Championship next season. 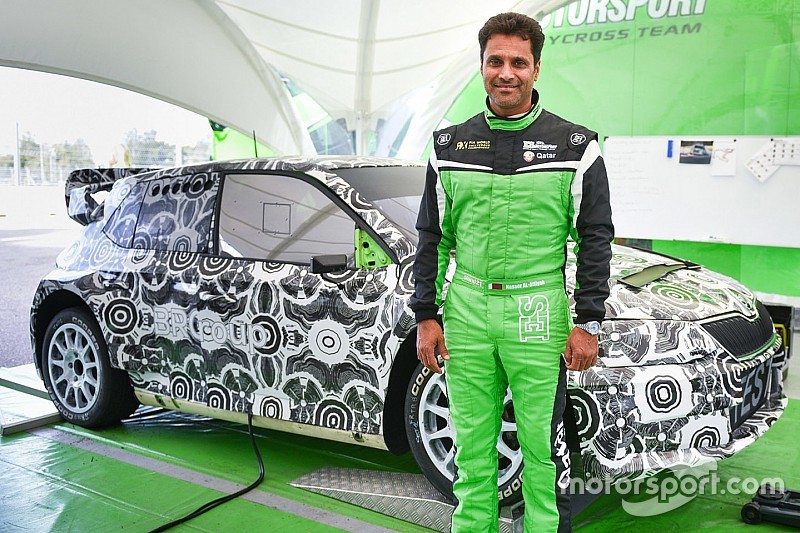 The Olympic medalist tested ES Motorsport’s new Skoda Fabia Supercar at the Bikernieki circuit in Latvia on Thursday alongside former works Hyundai WRC driver Kevin Abbring, who is currently working as test driver for the squad.

The test marked the first time the car, released last month, has been driven on a full rallycross circuit. The squad chose the Riga venue to compare its performance against times from the Latvian round of the World RX series last weekend.

“To be honest it’s gone better than expected,” team manager Ramunas Fetingis told Motorsport.com. “Already from the very first laps I can tell you that we can get to the European Championship finals, so it’s quite okay for us. We’re really happy.”

While Abbring is expected the remain as test driver with the Lithuanian outfit in the immediate future, the team is working with Al-Attiyah to finalise plans to contest World RX together in 2019.

“We are really happy with the pilots,” said Fetingis. “Nassar is really good in other races and he’s enjoying the rallycross car now. Also with Kevin testing for us we have really valuable knowledge. We didn’t sign the contract yet, but we are really confident that we will see a new a new face in World RX next year. I cannot officially announce that Nassar is coming but he is really happy with the car, with the team and we are happy with his performance so we are doing everything to make a deal for next season.”

Having rolled out its first Fabia Supercar, built between Czech firm Blue Engineering and French company Vaison Sport, the squad is evaluating whether to build a second car to current regulations, or focus on developing an electric machine ahead of World RX’s proposed switch to electric cars, which has been postponed until 2021.

“The team is discussing right now which car to build. To already develop an electric Supercar or a normal Supercar like it is now. We have plans for at least five years in World RX, so that means we will have to go with electric car in 2021 if we want to be in the World Championship.”

The team will stay in Latvia for a second day of testing on Friday, and hopes to run the car in Germany and France in the coming weeks. “We are dealing with Nassar because his calendar is really, really tight. Maybe we will test after the World RX race in Germany. If we will not succeed to do that immediately after the race (in mid-October) then maybe we will go to France.  Now it’s just to do everything to find more speed and kilometres are everything.”