Outgoing Super1600 champion Rokas Baciuska emerged as the overnight leader in Latvia, topping the Day 1 order for the second successive World Rallycross round. 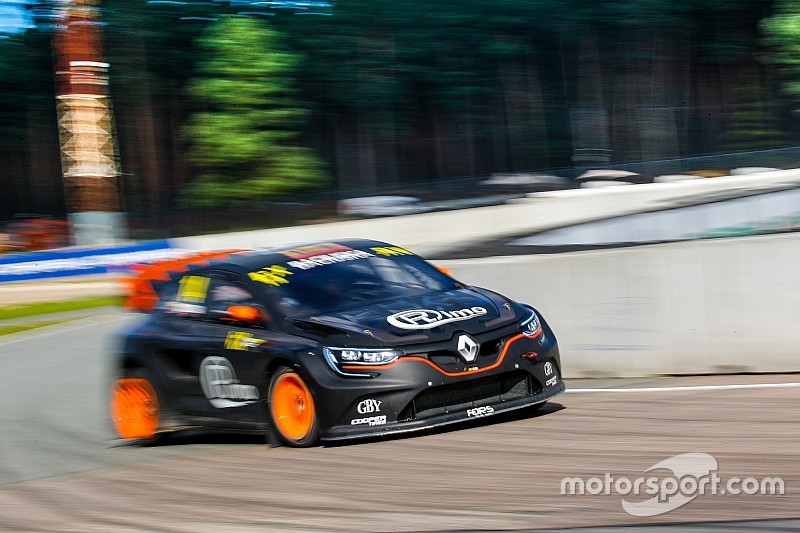 The GCK driver beat points leader Andreas Bakkerud to race victory in the first session of the weekend and in the overall times.

Championship contender Kevin Hansen set the third best time having started from an outside grid slot and taken he lead of his race at the first corner, while a similarly good launch propelled Bakkerud’s RX Catel teammate Liam Doran into the lead of his race in Q2.

Eighth in Q1, Doran finished just ahead of Finn Niclas Gronholm in the timesheets in the first session, then led the Finn for the opening three laps of their Q2 encounter.

Gronholm hassled the rear of Doran’s EKS-built Audi, and by taking his joker a lap earlier than the race leader, pipped Doran to the line to take the race win and with it the fastest time.

The result lifted Gronholm to second overall, ahead of Swede Anton Marklund, who made it two GCK Renaults in the top three with second best time in Q2, beating Bacisuka on track when the Lithuanian lost time behind the pair’s teammate, Guerlain Chicherit, the Frenchman having been fourth in Q1.

Of the three drivers separated by two points at the head of the series, Bakkerud and Hansen brothers Timmy and Kevin, it’s Bakkerud who is highest after the opening day in Riga, holding fourth in the Intermediate Classification, one place ahead of Kevin Hansen with Doran in sixth.

Timmy Hansen meanwhile lost time at turn one in Q1, then had a side-by-side battle to the finish line with 2019 European Rallycross Champion Robin Larsson at the end of the pair’s race.

That battle continued at the start of their Q2 encounter. While Doran took the lead with the best start, Larsson ran inside Hansen through turn one and into the turn two right-hander, where Hansen’s Peugeot also made contact with Krisztian Szabo’s Audi and hit the turn two wall, causing him to spin.

Larsson was later disqualified from Q2 for the incident, while Hansen spun at the circuit’s jump with broken right rear suspension and retired. The Swede is currently outside the semi-final qualifying positions, in 15th.

Russian Timur Timeryznov rolled his Hyundai at turn two in Q1 after clipping the tyre wall, but with the car repaired by Marcius Gronholm’s GRX team, he was fifth fastest in Q2 and climbed into the top 12.