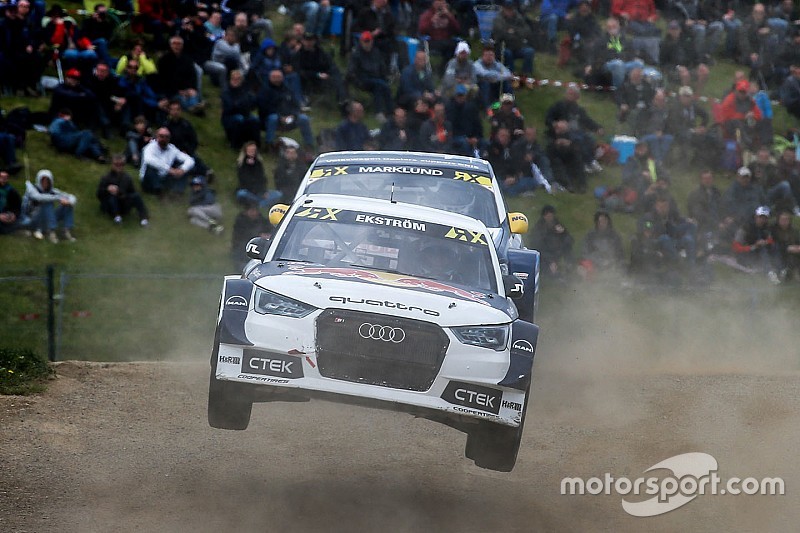 Swede Mattias Ekstrom claimed his second World Rallycross Championship victory in the space of a week by winning the third round of the series at the Mettet circuit, in Belgium.

Just a week back, Ekstrom took his third ever World RX victory at Hockenheim, before becoming the first driver in 2016 to take maximum points from an event to lead the championship outright for the first time in Belgium.

Having topped the order at the Intermediate Classification, Ekstrom started from pole position in the first semi-final and led the race throughout to claim the same grid spot for the final.

The EKS team owner was joined on the front row by semi-final two winner Petter Solberg, the pair sharing the lead of the championship heading into the event.

As the lights went out in the final, Ekstrom made a good start, Solberg slotting in behind with Sebastien Loeb tight on Solbergs bumper.

As the pack all moved to the inside, Anton Marklund had hooked up a great start from the back row of the grid and hung it out around the outside to jump up to second place at the first corner, splitting Loeb and Solberg.

Loeb hadn’t had a great start, but it was worse for fellow second row starter Johan Kristoffersson, who’s Volkswagen Polo immediately dropped onto three cylinders at the start.

The Swede kicked the clutch to get the car away but it wouldn’t with Kristoffersson retiring on the opening lap.

Solberg and Belgian driver Francois Duval took their jokers on the first lap, the pair then held up when Marklund lost control of his Polo after a compression on the loose on lap two and had a half spin, before immediately taking his joker.

Up front, Ekstrom and Loeb pulled away, Ekstrom setting fastest lap times in the process. Marklund made his way back up to fourth by passing Duval at the start of lap five, the former WRC driver having picked up a rear puncture on his OMSE Ford Fiesta.

Ekstrom and Loeb both took their joker laps at the final opportunity, the Swede winning the race while Loeb re-joined the main circuit ahead of old rally foe Solberg to claim his maiden World RX podium.

Latvian Janis Baumanis almost made it into the final, he finished the first semi-final third on track but was black-flagged for first lap contact.

Reinis Nitiss’ first semi-final appearance of the season ended with clutch failure on his Seat Ibiza.