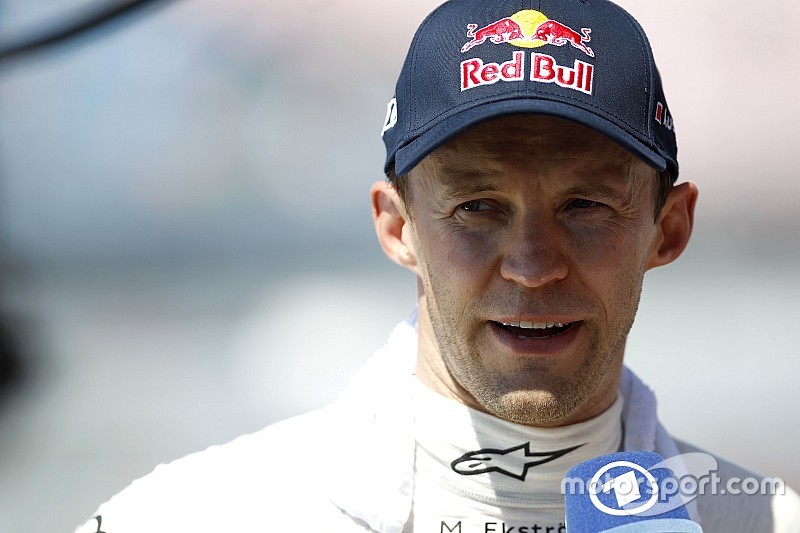 Mattias Ekstrom continued his qualifying dominance in 2016 World Rallycross Championship events by finishing top of the Intermediate Classification for the third event in a row at Mettet in Belgium.

Top at the end of day one, Ekstrom was fastest in Q3 to start on pole position in the last race of Q4.

In the last qualifying race of the event, Ekstrom ran deep into the first corner off the start, alongside Sebastien Loeb, dropping to fifth in the race, where he would finish, but did enough to be top overall after the four qualifying races.

In that same race, Petter Solberg made a poor start but as the rest of the pack ran deep into turn one the Norwegian found his way up the inside of Loeb and into the lead of the race.

Solberg pushed hard at the front to set the fastest time followed by Loeb, the pair finishing second and third behind Ekstrom in the Intermediate Standings.

Fourth overall is Johan Kristoffersson, who will start on the front row of the semi-final two grid with Solberg.

Francois Duval made it three former WRC drivers in the top five by qualifying fifth overall with a strong second day performance, while Peugeot Hansen driver Timmy Hansen followed teammate Loeb for much of the last race in Q4.

But, such was the competitiveness of the field that the Swede set the eighth fastest time, ending up sixth at the Intermediate Stage with Janis Baumanis making it into the semi-finals in seventh and Anton Marklund having his best qualifying of the year in eighth.

Baumanis’ Russian teammate, Timer Timerzyanov will make it two World RX Team Austria Ford Fiestas in the semi-finals by qualifying in ninth, despite going off in Q4 when trying to make a pass on Ken Block.

Olsbergs MSE driver Kevin Eriksson and Peugeot Hansen Academy’s Davy Jeanney qualified 10th and 11th, while Latvian Reinis Nitiss made a good start in his Q4 race to find a gap on the inside and lead the race, the Munnich Motorsport driver making the semi-finals for the first time with the team’s Seat Ibiza RX.

The Hoonigan Racing Division had a challenging third event with the Ford Focus RS RX. Block was only able to complete one qualifying race due to electrical issues in Q1, suspension problems in Q2 and driveline dramas in Q3.

The Hockenheim podium finisher was classified 18th. His young teammate Andreas Bakkerud had a similarly difficult weekend but almost made the semi-finals with third fastest time in Q4, he ended up 14th, one spot behind Robin Larsson who wasn’t able to continue his form from the first two events of the year.

Finnish driver Toomas Heikkinen had been unbeaten in World RX events at Mettet in the last two years but a string of poor qualifying races was compounded by a non-finish in Q4, leaving him 16th overall.

Liam Doran’s second day was much like his first, the British driver retired from his Q4 race at the first corner when his JRM Mini lost a driveshaft from contact with Timerzyanov and missed the semi-finals.