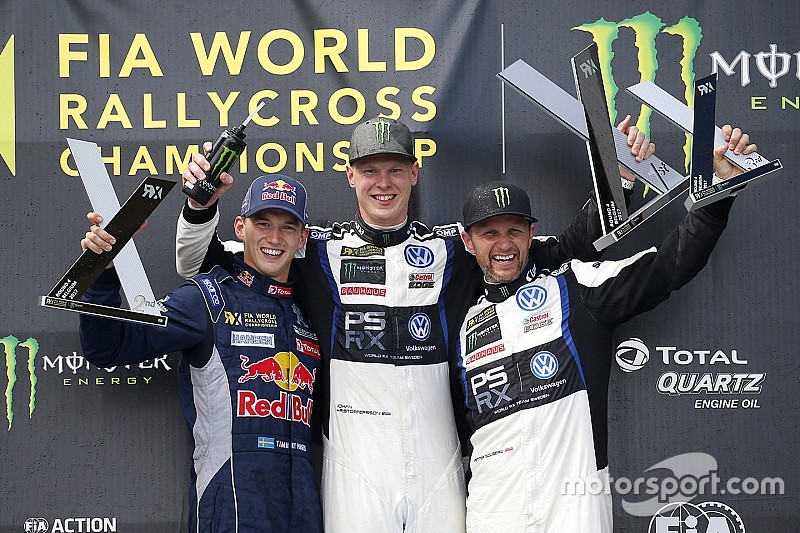 Johan Kristoffersson delivered on the potential shown through the qualifying stages of the Belgian World Rallycross Championship round at Mettet to score a first victory for the PSRX Volkswagen Sweden team.

But the Swede’s win wasn’t as clear cut as his earlier pace had suggested it might be, and even on the fifth lap, the race looked to be heading the way of Team Peugeot-Hansen driver Timmy Hansen.

Kristoffersson started from pole position in semi-final one but with drizzle having fallen just before, the Volkswagen driver made a slow start and chased Hansen throughout the race to qualify for the second row in the final.

In the second semi-final, Kristoffersson’s teammate Petter Solberg also made a poor getaway, but fought back to win the race, passing Andreas Bakkerud when the Norwegian took his joker.

The double World RX Champion made the best start in the final to take the lead from Hansen at the first corner, where each of the six drivers made it through unscathed, Bakkerud and Kevin Eriksson taking the outside line.

Eriksson was first to take his joker on lap one, before Kristoffersson took the extra route on the second tour from third position.

While his younger teammate was in the joker section, Solberg ran wide in the final corner of lap two, allowing Hansen a run on the Volkswagen driver, the Swede making a move for the lead into turn one of lap three.

Solberg didn’t concede track position easily and tried to turn in alongside Hansen, but there wasn’t enough room, Solberg running wide and just avoiding the outside tyre wall.

As he rejoined, the front of his car made contact with Andreas Bakkerud’s at the entry to the jump, Bakkerud’s Ford being pushed into the tyre wall, sustaining damage from which he would retire.

Having started from the back row of the grid, after losing out at the start of his semi-final, points leader Ekstrom climbed to second as those ahead jokered, Hansen edging away.

Ekstrom maintained track position until the final lap, which helped Hansen’s victory cause, but the front-left tyre on the leader's Peugeot punctured over the jump on the final lap, the Swede taking his joker around the outside of the final corner and losing the win to Kristoffersson in the closing stages.

Ekstrom finished fourth and Eriksson concluded the race in fifth, some 11 seconds down on the winner.

Nine-time World Rally Champion Sebastien Loeb missed out on a place in the final. The Frenchman had a 360-degree spin at the first corner of the first semi-final, following side-by-side contact with Eriksson over the circuit’s jump and hitting the wall on the outside.

Carrying damage on his Peugeot 208, Loeb battled back to challenge for a top-three position and entry to the final but his car slowed after the hairpin on the fifth lap.