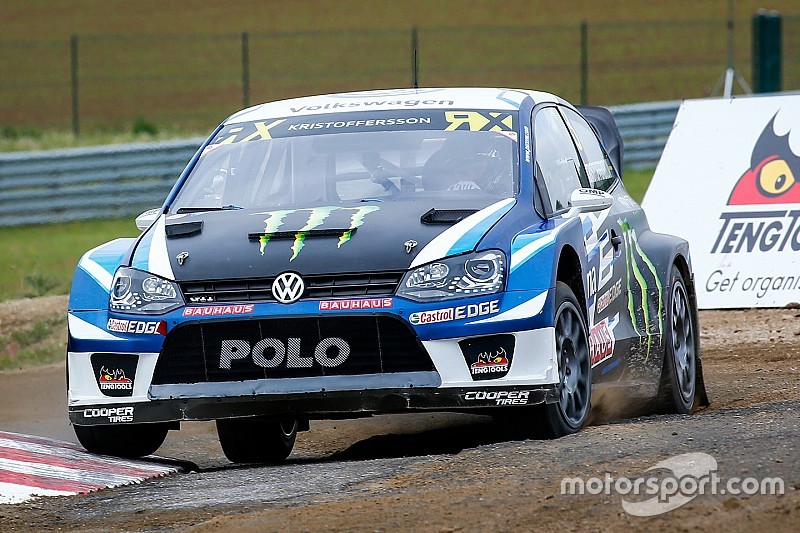 PSRX Volkswagen Sweden pairing Petter Solberg and Johan Kristoffersson dominated day one in the Belgian round of the World RX at Mettet, the Swede claiming top spot overnight.

Solberg was fastest in the one-hour Friday evening practice session, before Kristoffersson beat his colleague’s best time by 0.206s in the Saturday morning runs.

Kristoffersson won the third race of Q1 from pole positon to set the best time, only beaten by Solberg in the last race, the Norwegian gaining in his final-lap joker to be quickest by 0.131s.

In Q2, both drivers made it through the tight right-hand first corner unscathed, despite minor contact between the front-right of Mattias Ekstrom’s Audi and the left-hand door of Kristoffersson’s Volkswagen.

Solberg led from the front and took his joker on the final lap, but with Kristoffersson having split the team’s strategy and taken his extra-route on lap two, in a dash to the finish line he edged Solberg to fastest time and as a result of being the most recent to be quickest, takes the overnight top spot.

“This is a really good start. We had a slightly different approach to this race, we tried a lot of things in practice,” said Kristoffersson.

“Both me and Petter tried some different setups on the car. In Qualifying 1 we found really good speed, I was actually a little bit surprised that the speed was so good.

"In Q2 the track was really rough, maybe not for the rally guys but for me as a racing driver. I think we have taken quite a step since Hockenheim.”

Meanwhile, Ekstrom ran wide over the jump after the first corner in Q2, narrowly avoiding contact with Timmy Hansen, and ended up 11th on the timesheets. A fifth fastest time in Q1 puts the regaining champion, who is so far unbeaten in World RX this year, seventh at the end of day one.

For the second event in a row, Team Peugeot-Hansen driver Sebastien Loeb had a competitive day one. After finishing second to team mate Timmy Hansen in their Q1 race, he led his encounter throughout Q2 to be third fastest and move up to third overall.

Hansen, meanwhile, dropped to sixth on day one, having been third after Q1. Hansen was 13th fastest in Q2, his Peugeot hit in the rear at the first corner of the last race of the day by Andreas Bakkerud’s Ford.

Bakkerud was fourth and then seventh to be fourth overall on day one, but was later handed a five-second penalty for the contact with Hansen and dropped to 11th.

Ken Block was a direct beneficiary of his Hoonigan Racing Division teammate’s penalty and climbed from sixth to fifth overall as a result.

MJP Racing Team Austria driver Kevin Eriksson had a solid day. Second fastest to Kristoffersson in FP2, he was seventh and then sixth in the two qualifying races to end up fourth overall after Bakkerud’s penalty.