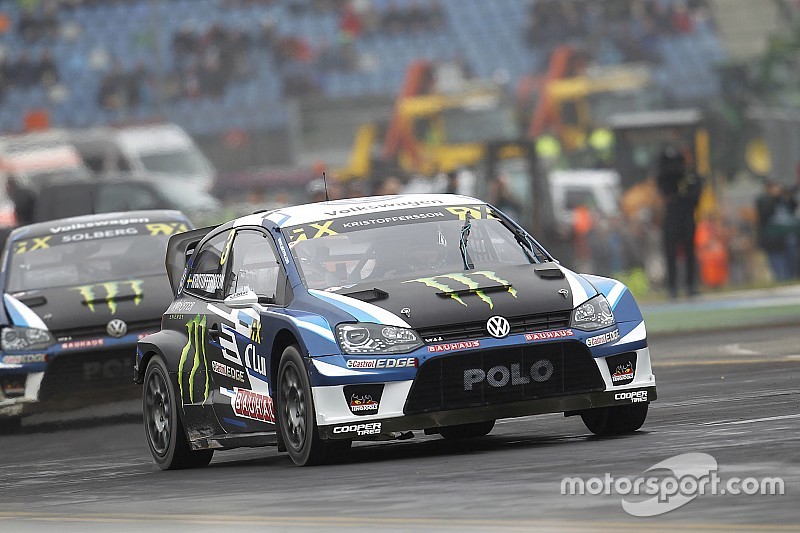 Multi-discipline specialist Johan Kristoffersson completed a near perfect run through the qualifying stages in the Belgian round of the WRX to finish at the top of the Intermediate classification.

The PSRX Volkswagen Sweden driver was fastest in both Q3 and Q4 on Sunday morning to claim pole position for semi-final one and 16 Championship points in the process, flanked by his teammate Petter Solberg.

Kristoffersson ran with new front tyres in Q3 and, despite a slow start, snuck up the inside at the first corner and won the race, beating the previous best time of the session set by Mattias Ekstrom by over two seconds.

Solberg lost out to Sebastien Loeb in Q3 on track but remained second, before also running new tyres on the front of his Volkswagen in Q4.

The Norwegian didn’t make a brilliant start from the middle of the grid in his Q4 race, Kristoffersson taking the lead and winning on track to secure his third fastest time of the event.

Solberg could only manage sixth fastest time. Initially running third to Kristoffersson and Ekstrom, he took his joker on lap one as the reigning champion Ekstrom’s Audi suffered broken front-right suspension – likely a result of turn one contact – on lap two and was immediately passed by Timmy Hansen.

Solberg then lost time behind Ekstrom’s wounded car, the Swede releasing the Norwegian by taking his joker lap.

In the same race, Loeb had been squeezed into the tyre wall on the inside of the first corner and lost ground, Solberg remaining second at the intermediate stage. He will start on pole position in semi-final two as a result.

A pair of solid times by Hansen on day two, following overnight work to re-patch a badly rutting loose section on the circuit, lifted the Swede to third overall, ahead of Andreas Bakkerud who struck back from his Q2 penalty to be fourth thanks to second fastest time in Q4.

Loeb wound up fifth with Bakkerud’s teammate, Ken Block, sixth in a strong weekend so far for the American driver.

Ekstrom managed eighth overall despite his Q4 dramas, in part thanks to his second fastest time in Q3, one place behind his teammate Toomas Heikkinen in the Intermediate standings.

Young Swede Kevin Hansen’s event ended on the final lap of his Q3 race when he rolled his 2016-spec Team Peugeot-Hansen 208 Supercar after out-braking himself into the Mettet circuit’s second loose section, hitting a tyre wall and sending the car into a heavy roll. The damage caused was enough for him to go no further.