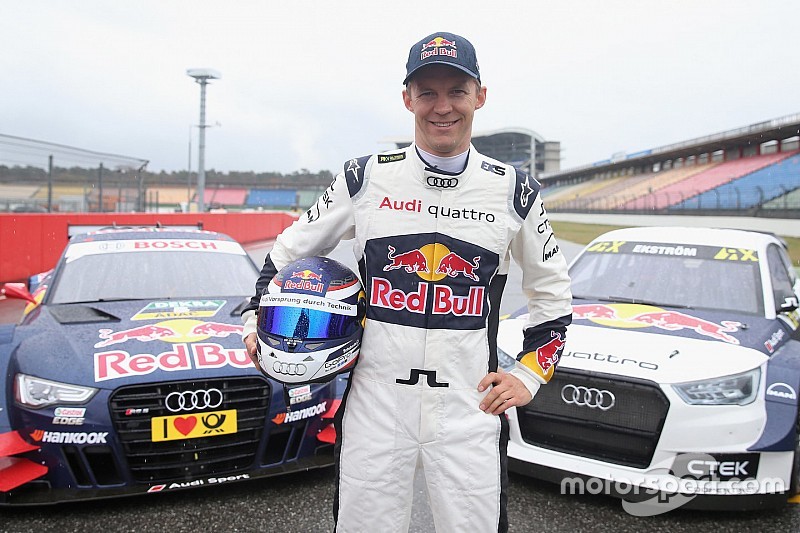 Swedish DTM and FIA World Rallycross Championship driver Mattias Ekstrom will compete in both disciplines on the same weekend at the series’ double-header at Hockenheim in Germany on May 6 – 8.

Rallycross visited the historic Formula 1 venue for the first time last season, joining the DTM for the German touring car championship’s opening round of the year.

12 months ago, two-time DTM champion Ekstrom focused solely on his touring car commitments, handing driving duties of his rallycross Supercar to GT racer Edward Sandstrom - yet Ekstrom will drive both Audi’s RS 5 DTM car and his own EKS team’s Audi S1 Supercar in the event this season.

“Being able to race in the DTM and rallycross at Hockenheim is like Christmas and Easter combined on a single day for me,” said Ekstrom.

“I’m very thankful to Audi for this unique opportunity. Following the final pre-season tests in my Red Bull Audi RS 5 DTM at Hockenheim, I’m all fired up for the first two DTM races of the new season. We have good chances of repeating last year’s victories.”

Both the DTM and World RX events will take place over the Friday, Saturday and Sunday, with the World RX semi-finals and final taking place on Sunday morning between DTM practice and qualifying for the series’ second race of the weekend.

“That I’ll be able to additionally compete with world stars like Ken Block, Petter Solberg and Sebastien Loeb at the wheel of my Audi S1 EKS RX quattro in front of thousands of Audi fans at the Motodrom is fantastic," Ekstrom continued.

Audi’s Head of Motorsport Dr Wolfgang Ullrich has given his grace for Ekstrom to race in both disciplines on the same weekend.

“Many of our factory drivers have programs alongside the WEC or the DTM, for instance in Formula E, the Super Formula in Japan or in GT racing,” said Ullrich.

“With each race, they gather additional experience that we benefit from. This applies to Mattias as well, who has invested a lot of passion in building his rallycross team and, what’s more, competes in an Audi.”

The opening round of the World RX takes place at Montalegre in Portugal this weekend.